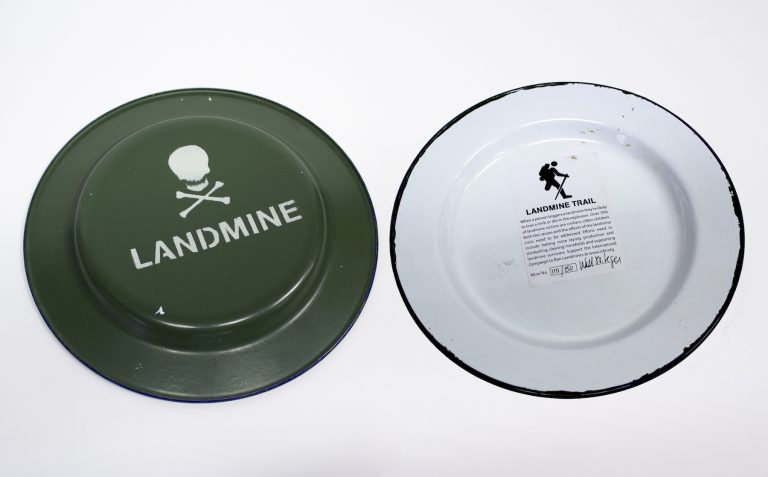 “The first piece of true ‘artivism’ that I did was on the landmine issue…landmines were different. In comparison to say, climate change which involves a worldwide effort of cutting our addiction to fossil fuels, land mines are man-made by a small number of weapon companies, so ban them outright!

I wanted to do something to mark the International Landmine Awareness Day on the 4th of April each year. I picked the 1st of April as my planting day because if I got nicked by the cops I would use April Fool’s day as a pathetic excuse for placing dozens of fake bombs around an Irish city. 1st April we set off, planting them around Dublin’s parks and green spaces… including outside the American Ambassador’s house and The President’s Mansion.

[late that day, the news came that] Merrion Square was closed off and crawling with cops searching the grass on their hands and knees. I thought it was an April fool trick until I went down there and it looked like a crime scene with Police tape and everything.

So I asked a Garda what was going on and it turns out, an American tourist spotted a ‘landmine’ and called the emergency services, when the cops arrived they told him that they were obviously not real and even said it was a good idea!“

Courtesy of Will St Ledger