Apartheid is Rotten to the Core 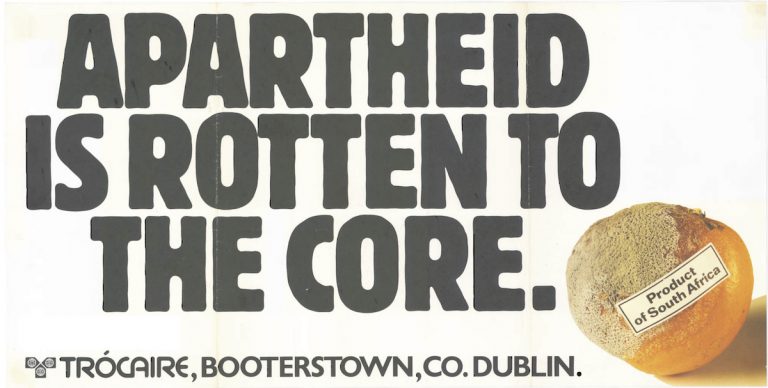 “South Africans have a long association with Trócaire, who have not only been staunch opponents of apartheid but have also initiated and supported projects within South Africa since 1977. The new and democratic South Africa shares the commitments of Trócaire, and indeed the people of Ireland, to the alleviation of poverty and the development of a human rights culture.”

Trócaire was one of the first Irish NGOs to become involved in the struggle against the apartheid system in South Africa, a struggle which lasted almost two decades. Trócaire’s then Chairman, Bishop Eamonn Casey, was an outspoken critic of apartheid and Trócaire regularly challenged the Irish people and government to condemn it.

As well as campaigning on the national and international stage, Trócaire funded grass roots projects with schools, youth organisations and trade unions. It also raised awareness of injustices in South Africa by bringing prominent speakers, including Archbishop Desmond Tutu and Donald Woods to Ireland.