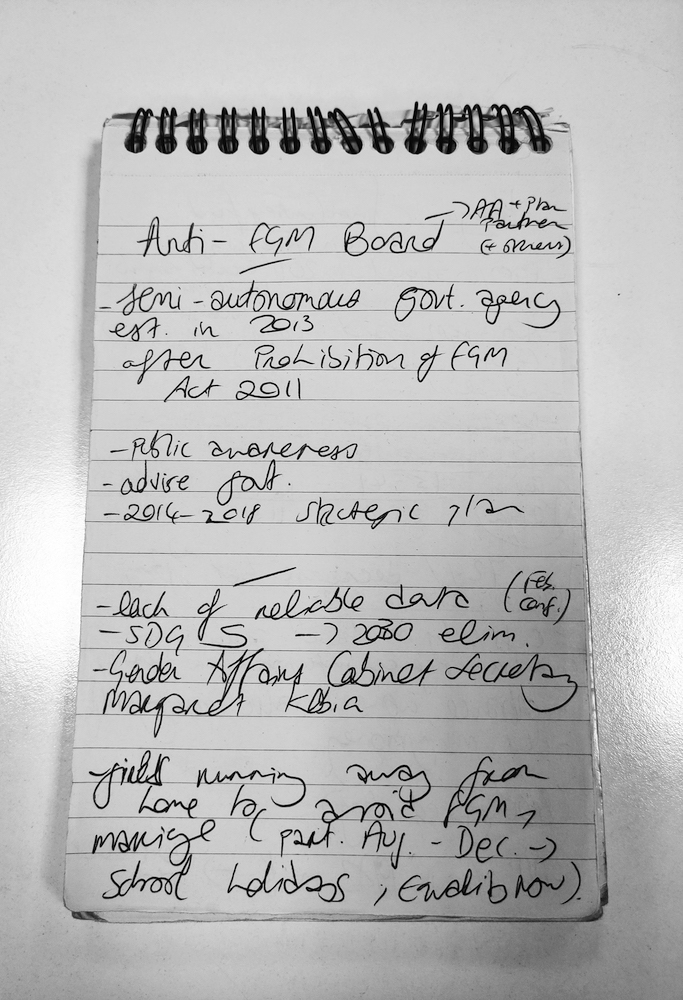 The notebook of a journalist documents facts, details, comments and stories, as they happen.

This is her notebook, where she documented facts and stories from her trip.

At least 200 million girls and women in 30 countries worldwide have undergone FGM. The practice involves the ritual cutting or removal of some or all of the clitoris and the labia for non-medical reasons.

In Kenya, about one in every five females aged 15-49 have been cut, according to the United Nations (almost half the number recorded in 1998) . However, the prevalence varies widely in different regions. In Somali communities in Garissa County, for example, the figure skyrockets to over 90%.

Órla’s notes record first-hand accounts of people who have experienced issues such FGM, violence and inequality. Her notes also catalogue powerful testimonies from women’s rights advocates and survivors who are tackling these issues, including former circumcisors Suli Gedi Jelle and Hilay Garad Hassan, and Maka Kassim, Chairperson of the Kamuthe Women’s Network in Garissa.

Gathering evidence, tracking down people and unearthing the stories behind statistics are essential in generating awareness and critical responses if we are to challenge day-to-day realities both near and far, one story at a time.

This work culminated in the publication of a three-part series on TheJournal.ie, supported by the Simon Cumbers Media Fund, during the summer of 2019.

Read instalments from the series:

Courtesy of Órla Ryan and TheJournal.ie