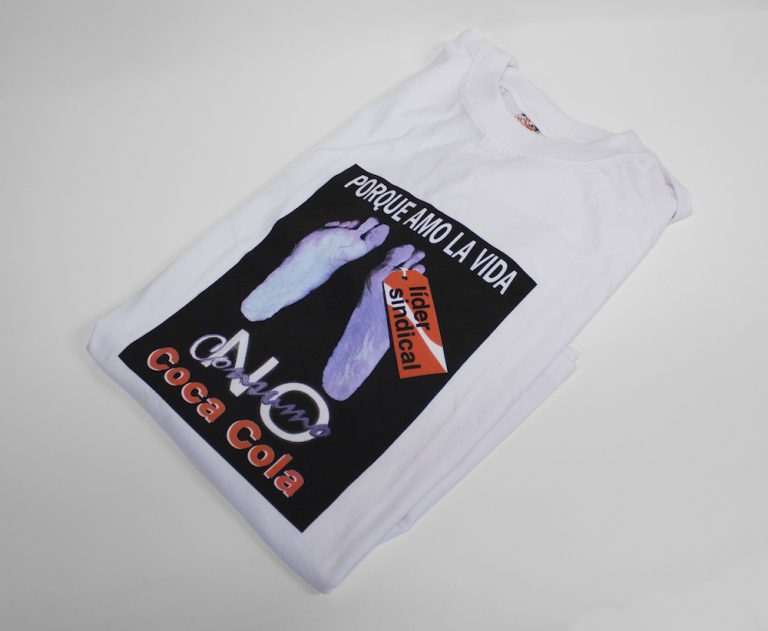 This t-shirt was developed based on centre of a dispute which has bottling plants throughout Colombia, the most dangerous place in the world in which to organise a union, where workers have been targeted by a concerted campaign of violence, kidnappings, and even murder.

“We remain strong in solidarity with the people of Latin America who have been affected by the Coca Cola corporation’s inhumane treatment. We stand with the people of Colombia and Guatemala who have been targeted by a concerted campaign of violence, kidnappings, murder. The children of El Salvador who have been put to work in dangerous and exhausting sugarcane harvesting. Mexico, where Coca Cola has been accused of building a monopoly, avoiding taxes, and using its political and economic clout to buy up vital water concessions for bottling and dumping, many of which lie within indigenous areas.”

The Latin America Solidarity Centre has been an active source of support during these disputes. LASC has served as a platform for two members of SINALTRAINAL, to express their views without fear of repression. As well as campaigning extensively to boycott Coca Cola products, reaching several important successes and alliances including the support of well-known bars in Belfast and Derry, SIPTU, and the Student Unions of Trinity College and UCD.