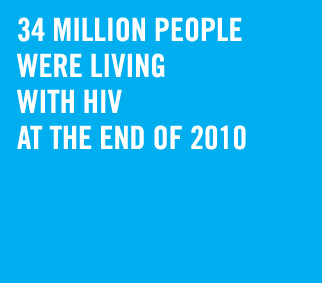 Aids-related deaths are at the lowest level since their 2005 peak, down 21%, figures from UNAIDS suggest.

The data also show that while the number of new infections has hovered around 2.7 million people globally every year since 2007, it is falling in 33 countries  — 22 of them in sub-Saharan Africa, the region that bears the brunt of the AIDS pandemic.

This year’s UNAIDS World AIDS Day report 2011 is a concise dossier on the progress and possibilities in reaching the internationally agreed target of zero new infections by 2015.

Women still bear the brunt of the epidemic as the proportion of women living with HIV has remained stable at 50% globally while women are more affected in sub-Saharan Africa (59% of all people living with HIV) and the Caribbean (53%).

It is no surprise that during these economically stringent times the report is aimed at funders, framing much of the work of UNAIDS in ‘return on investment’ and terms and not to spend less but instead to spend smarter and better through rapid scale-up operations. The science has improved and much has been learned. Up-scaling the fight does not necessarily have to cost more.

It is estimated that fewer than half of those living with HIV do not know that they are infected. This is due to the social stigma attached to people receiving HIV testing and/or treatment. It has proven to be one of the greatest challenges in tackling the global crisis. The report’s strength is in seeking to share new ideas and emerging success models across countries, such as in the pioneering campaign in South Africa to shift test access to self-testing at home.

UNAIDS is the Joint United Nations Programme on HIV/AIDS – bringing the activities of six United Nations organisations into a single synergised effort. It carries the main responsibility within the UN system for helping countries strengthen their long-term capacity in achieving universal access to HIV prevention, treatment, care and support.

For further information see our recently updated module on HIV and AIDS. The photography and story driven 2010 report This is What Has Happened: HIV, AIDs, Women and Vulnerability in Zambia explores the human face behind the statistics of HIV and AIDS and it’s impact in Zambia is also now available as an online resource.