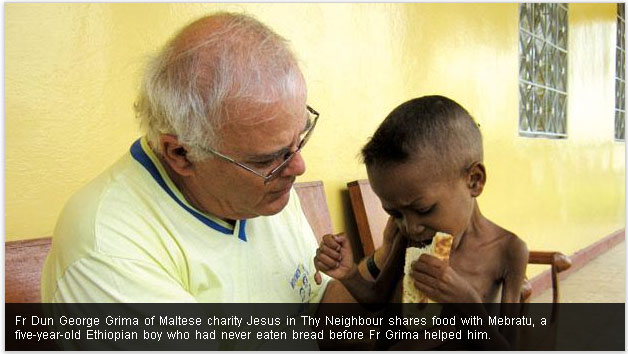 When writing about Africa we are told:

Among your characters you must always include The Starving African, who wanders the refugee camp nearly naked, and waits for the benevolence of the West. Her children have flies on their eyelids and pot bellies, and her breasts are flat and empty. She must look utterly helpless. She can have no past, no history; such diversions ruin the dramatic moment. Moans are good. She must never say anything about herself in the dialogue except to speak of her (unspeakable) suffering.

Does any of this seem familiar?

Behind these images of poor Africa is a resilient media industry of column inches and photostories determined to churn out stories for domestic audiences usually with a poorly contextualised focus on the suffering of others. Such approaches, we are often told are on the wane. For example, The Economist reports that popular Live Aid styled events no longer work like they used to:

For us, the trick is to be true to what we see without undermining the inherent dignity of each person we meet. […] Poor people are just like us in many ways; they’re just trying their best to make a go of it. We hope relating the honest truth, not some stylized, overly dramatic version of it, motivates our constituents

Sarah Carabott’s story made the front page of The Times of Malta on 14th May last month titled Saving the children. This was the leading photo carried with the article:

The article details the experiences of Fr Dun George Grima of Maltese charity Jesus in Thy Neighbour and the mission of the movement set up to “listen to and love the ignored” in Brazil, Ethiopia and Kenya. They rescue abandoned babies and children, sometimes disowned onto riverbanks, rubbish mounds, in juvenile homes or hospitals. They are then “adopted” by the Maltese for less than €28 a year.

Only one voice is presented in the article, one actor: that of the western priest. No child or carer is interviewed. What caused the rise of parentless children in those countries? Has this always been the case or did something occur to bring this on recently? What about prevention? Does anything need to be said about the cheap purchase of children and what happens to them beyond feeding, educating and healing? Could this story – or the accompanying image – be seen as exploiting the suffering of innocents without their consent?

Their example is one to take note of and see where it goes – if say, a campaign evolves from it or the Times take their criticisms on board: its not every day a story gets flattened as promotional cliché ridden material dressed as reportage.

‘When I feed the poor, they call me a saint; when I ask why the poor are hungry, they call me a communist’. These were the words of Brazilian Bishop Helder Camara some three decades ago. This ongoing debate about hunger in a world of abundant plenty is, unfortunately still with us as was illustrated by the article ‘Saving the Children’ in the Times of Malta, Monday May 14th. The article attempts to remind readers of the inequity occurring around the world when children die of readily preventable causes. And it offers a simple solution, in this case individual charity donated to a Maltese charitable organisation working in Ethiopia. And, in doing so, it manages to avoid most of the important questions that need to be asked.

Once again, we are presented with images and a story designed to pull at heartstrings, one of heroic work by western aid workers saving the lives and dreams of African children in a cruel and savage country that apparently cares little or nothing for its disabled who are, we are led to believe, dumped on rubbish mounds. We are informed that Ethiopian children are introduced to bread (the ‘staff of life’) by a westerner for the first time even though it has never been part of the normal Ethiopian diet. The only projects and carers presented are westerners, surely this cannot be accurate? Unfortunately, in trying to ‘do good’ the article instead does a great dis-service to the issue of world hunger for a number of reasons, principally that it provides no context whatsoever through which to judge what is described.

• Ethiopia is presented as a strange, cruel and savage place devoid of local people who care

• We are presented with a case study of one child without knowing, in any way, if it is representative

• Once again, we are (wrongly) told that an Ethiopian child’s well-being can be had for €28 per month through sponsorship

• And, we are presented with discredited images of the white man as saviour, the black child as helpless victim and African society as cruel and heartless – this is hugely distorting and grossly inaccurate.

We welcome the fact that the Times and its journalist highlight this pressing issue but we request that promotional material is not presented as reportage; that context and accuracy are included and that tired old western clichés and images are set aside.

Signed for the group by:

1.  will avoid stereotypical or sensational images
2.  will choose images and messages that represent the full complexity of the situations in which they work and;
3.  seek the permission of the people portrayed