Menu
Home / Blog / Heike Vornhagen: ‘Some of the movies might conform to stereotypes that people have but at the same time they also challenge them” – interview

Heike Vornhagen: ‘Some of the movies might conform to stereotypes that people have but at the same time they also challenge them” – interview 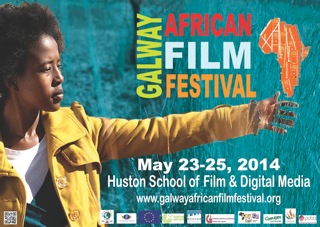 The Galway African Film Festival, now going into its seventh year, is taking place this weekend in Galway City from 23rd – 25th May. Bringing a wide range of films made by and starring Africans from across the continent has become an annual event on the west coast of Ireland. Tanzania, Nigeria, South Africa, Senegal, Egypt, Burkina Faso, Ghana, Lesotho. Over ten feature length and short films are being screened for a range of ages, film tastes and genre, whether yours is science fiction, thrillers or romcoms.

Tony Daly caught up with festival director Heike Vornhagen to chat about Africa on film in Galway and the role of movies outside of the classroom.

Can you tell me a bit about the festival and what inspired you to set it up?

The festival was set up back in 2008 when one of my colleagues in the Galway One World Centre (GOWC) was interested in films and had done a course in public advocacy with the Huston School of Film & Digital Media, so there was already a link with there. From previous work we had done with the Galway Film Society there was natural link there too.

So to some extent there was always this idea of bringing film and development education together.

Irish Aid launched a new funding scheme to celebrate African diversity and culture and we thought doing a film festival around this would be a good idea. To some extend you could say that it was funding led: we had thought about doing something like this already but couldn’t because there wasn’t any money for it. When the funding stream came online we said this was our chance to get it running and off the ground. It’s only grown since then!

Your choice to do development education using film is an interesting one. Why did you choose this way of doing DE?

It’s quite a different methodology. People go and watch films because they want to enjoy themselves; they don’t necessarily go in with this idea ‘oh, I’m going to be educated!’ or ‘I’m going to learn something new!’ as such. Very often they do learn something and it’s subtle and it slips in. People see on screen life in an African country that they wouldn’t have known about before that probably would have portrayed African people and African countries quite differently to what they thought Africa might be like.

If you were going to simply run a workshop lots of people would go along to it that are already interested in learning something about Africa. By doing film festivals you also get people that are going just to see a good movie and have no interest in ‘learning’ something. The educational dimension slips underneath and sets up a very different dynamic because you actually see people from Africa, whether black or white, and it’s a different way of dealing with stereotypes and prejudice as well without being a ‘DE setting’ or a ‘talk’ or workshop. I think films are ideal as they take away the pressure of people feeling “I have to learn something or I have to behave in a certain way”.

There are so many ways people are open to learning through films, indeed! Many of the films about Africa and about Africans that we have seen in Ireland in recent years typically come from Hollywood or from the England. What has drawn you to films that are made by Africans instead?

It’s like having a different lens. Someone was recently saying to me that it’s a similar situation if you’re thinking of Ireland and there’s a difference between watching The Quiet Man and watching The Commitments. One is an American lens on what they think a country should be like; the other is the lens of the people on what they think about themselves. I think this applies to more films that have been done about Africa or about African people than anywhere else if they are being done with a European audience in mind, first and foremost. With this type of lens they are more likely to conform to a certain stereotype which could be about black characters being rather one dimensional or that they only exist as a backdrop to the ‘white saviour’ or if the white person is the villain then there is still the backdrop to support the white guy/women in their own personal development or transformation.

By trying to get African-made movies we are trying to shift that perspective a little bit. Some of the movies we have screened might conform to stereotypes that people have but at the same time they also challenge them. To some extent our role isn’t to censor films that come from Africa because some movies would deal with war, poverty and violence. But it’s set within a broader context and is far more complex than people would usually view Africa when they are going to see a Hollywood movie. You can get crap films as well but that’s the way it goes!

That has plenty to do with the production budget, editing room issues etc that we’re well used to seeing here in Ireland as well!

The festival is driven by a partnership approach which has subsequently grown into the whole ethos and existence of the festival. In terms of the role of partnerships how important have they been for you in putting on the festival?

From the origins of the film festival we already had a partnership with the Huston School and the Galway Film Society and then we thought, if you want to broaden it we had to bring in people who either had a background in film or have a background in the development-side of things. This means we have a good sounding board where we can say, “this is what we want to do, what do you think?” It’s not just the GOWC having to decide; we are drawing from the rich experience around us.

Partnerships are also helpful to publicise the festival much more widely than we would be able to do ourselves. We’re a tiny tiny development education centre in Galway so we just wouldn’t have the capacity to get it out to as many people as we do through the partnerships we have, which we hope to grow on in the years ahead.

Like other festivals the thing they’re great for is the buzz they create between people and groups and the power of ‘word of mouth’ in an area.

What’s been the impact of the festival on Galway and Galwegians?

I’d say the response has been mixed. Some people have responded really well in terms of enjoyment and learning and the feedback we get, saying “I never thought Africa would be like that”. That has been really lovely to hear. It’s also been nice to hear from members of the African community who’ve come along to see films and thank us so much for putting on the festival telling us that “It brought back home to me” or “It made home alive to me”.

On the other hand around this time of year there is usually a question around how much money was spent in Galway on Africa Day (an annual celebration of African culture in Ireland) and I’m always wondering if that’s because of the festival and whether people are concerned. I remember when one person rang and said, “Look at all the money being spent on Africa – you shouldn’t be doing this”. This can be the downside – you get people that don’t see the value of doing the festival and may be very much against it. That’s something we’re trying to change by saying to people, “Come along to a movie and that might change your mind”.

The festival can always be much bigger and much better. I think we have a really good line-up of films and I would love if in future we could get some directors to attend. At the moment its really tricky to do because by the time the funding is confirmed we have about two weeks to pull the rest of the festival together which leaves us no time for organising visas. That’s really tricky and it’s certainly one of the things we’d like to develop better.

We’re also waiting for the arts cinema to open here which would be like our natural home for the film festival and would substantially increase the potential impact of the festival as well.

Lots of opportunities and challenges for the future of the festival. What are your highlights from the festivals over the past six years?

Being one of the organisers we don’t usually get to watch the films as they happen – we need to catch them on DVD before or after as most films would arrive in that format (unlike going back to 2008 where most films were on 35mm format). Looking back we screened The Lion’s Point of View which looked at refugee and migration issues from an African perspective. In a development education context that would be a really good movie to look at.

Personally I enjoyed a science fiction short film we showed a few years ago called Punzi which looked at the world after the next World War with a focus on a world without water. This short film showed the capacity and the talent that’s found in Africa and also an issue that is pertinent in terms of sustainability and development education.

For more info on the festival this year visit https://galwayafricanfilmfestival.org/festival-2014

Heike’s highlights for the 2014 festival:

Short film that’s opening the festival this year that looks at the pitfalls of ‘development’. Development may be good for generating money and incomes but what is the personal cost to this? The film is too short and could easily have been extended to two hours! One of my favourites for the festival.

It’s an experimental film around a guy who has a day to live. He wakes up in the morning and knows that when we has to go to be later that evening that he will die. So with that he goes around where he lives and says goodbye to his friends, family and colleagues. I can’t wait to see it I’ve heard it’s a stunning film and brings out the deeper questions about life and why it’s important. Again, it takes away from the idea that Africa is about poverty, war and violence: you could say that this is a cerebral kind of movie and beautifully shot.

The landscapes in Forgotten Kingdom just look amazing! I’m also a committed horse rider and there’s lots of horse riding in the movie so I’m definitely looking forward to that one. I talked to a colleague who said that it’s really really beautiful to look at and quite a nice and interesting story in terms of a young man who returns to Lesotho after his father moved the family to South Africa for work. Now he’s returned to his home country for his father’s funeral and he feels like he’s a stranger in his own country and has to deal with that and his own path in life. Another interesting theme to consider when we are thinking about Africa.