Menu
Home / Blog / A reflection on my privilege

A reflection on my privilege

I decided to go in to the ‘refugees welcome’ protest last Saturday in Dublin, partly because I really care about this issue, partly because I knew I had to write this blog, and partly because, as my mom likes to joke, I love a good protest. I wondered who would be there – I imagined the solidarity there would be amongst groups and I contemplated whether any refugees would see this event taking place and know that at least some Irish really mean the Fáilte we extend to them.

When I woke up on Saturday morning, I was delighted that it wasn’t raining. I had already planned an excuse for my  editor about why I couldn’t go if it had been pouring down – the Friday before had been torrential rain and I had gotten caught in it, I wasn’t prepared to go through that again!

Alas no, it was dull but dry. So I got up, cleaned my room and sent some emails.

I realised it was later than I thought and that I wouldn’t get into Dublin until 2.30pm even though the protest was at 2pm, but I decided to take the time to have some breakfast. You know, it is the most important meal of the day!

Come 1.50pm I was seated on the train, iPad out, ready to do some reading on the refugee crisis.

Some minutes into my journey, my pesky anxiety problem came into play. I began to have an attack. I’ll spare the dramatics of it but basically I thought I had to get off the train or I was going to die. Sweat was dripping down my back, my legs were shaking, and I could barely catch my breath. It is my most dreaded feeling and I will do anything to avoid it.

Then it hit me. I’m not talking about the ‘oh, I never thought about that before’ hit me. I mean a cacophony of sound, car crash, movie explosion slap across the face hit me.

What a privileged life I lead.

While it’s certainly horrible to have an anxiety attack, I had the privilege of pressing the green beeping button at the next stop and stepping off the journey that was causing me pain. Tears ran down my face as I realised that the very people I was supposed to be in solidarity with that day surely felt a hundred times more distress than I did and yet getting off the train/boat/van isn’t an option for them.

In the last few weeks there was uproar on social media because refugees had smartphones (see this Business Insider story on Syrian refugees being shamed for using mobile phones). Instead of this jolting a feeling of ‘they’re just like me’ the reaction was closer to ‘they aren’t poor they don’t need my help’. 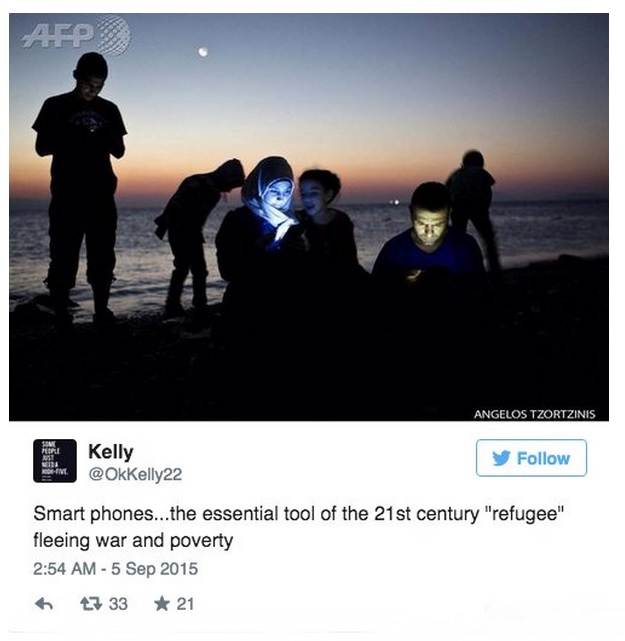 James O’Malley (in UK edition of The Independent) calls into question the notion that smartphones,

‘…should render one ineligible for help when trying to stop yourself and your family from dying in a war.’

In my eureka moment I wondered if Syrians desperately Googled the places they were going to in order to try and survive, to try and learn what language they would need, if there was anywhere to get help once they had arrived, just like I had desperately Googled the politics of the crisis so that I could seem informed. So that I could pretend that I know the ins and outs of the situation.

Now that it’s Monday, I’m asking myself what I can take from my experience on Saturday.

While I did eventually make it into the march, I feel that that’s not enough.

While I value researching this topic and having an analytical perspective on it, that’s not enough either.

What is most important and valuable for me is to reflect on our privilege, awaken our empathy with these people and ensure our shared humanity stays at the core of this issue. If we are guided by this then maybe we have a shot at addressing this crisis with the humanity it deserves.