‘Back to Black’ Friday 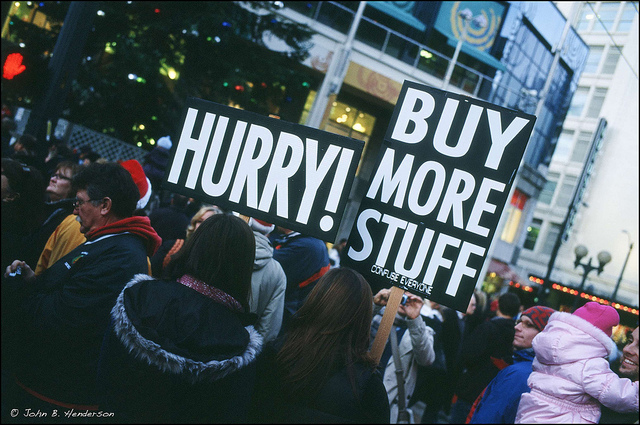 The hyper-consumption phenomenon, Black Friday, now takes place beyond the US and is growing. Toni Pyke reports on Black Friday from an afternoon in late November.

It’s Friday, 24th November. It’s 9am and I’m stuck in Kampala traffic. This is nothing unusual. Much of my day is spent in traffic.

What is out of the ordinary however, is that the road that I’m currently waiting on is usually free at this time. I notice also that the parking lot of one of the shopping centres is already packed and that cars are parked along the sides of the road, reducing traffic to just one lane of a dual carriageway. There is no movement in any direction. And this situation is never pleasant in Kampala, where in practice, traffic rules rarely apply.

Once I manage after more than an hour to move less 500 metres, I make a mental note to leave 30 mins earlier than normal for the school pick-up – just in case.

However, the traffic on the pick-up run was worse than the drive in and there is no way I’ll make it to the school. What is going on? As I ring a friend to beg a lift for my kids, she informs me that today is Black Friday.  I was stunned. All this chaos and commotion for 50 percent off!?

In recent years Black Friday has become a much bigger event that has spread over much more than Friday and, evidently, over much of the globe.

Black Friday indicates that Thanksgiving, America’s biggest holiday of the year has arrived and the official start to Christmas planning and shopping has begun, with the day after Thanksgiving, known as Black Friday, officially kickstarting the consumption process.

The origins of the term ‘Black Friday’ are disputed. For those of us on Facebook, you will have seen the link with Black Friday and the slave trade, where back in the 1800s Southern plantation owners in America could buy slaves at a discount after Thanksgiving. This however, has been proven to be ‘fake news’!

Some say that the term was first used in the US as early as 24 September 1869, when two gold speculators, Jay Gould and James Fisk, tried to dominate the gold market on the New York Stock Exchange. When the government intervened, prices plummeted and many investors made huge losses (see BBC.com for more interesting facts).

According to history.com “Black Friday” ‘might’ refer to the single day of the year when retail companies go “into the black”, that is, they make a profit after a supposed loss (“in the red”) for most of the year. As the story goes, in the 1950s in the US state of Philadelphia, the day before the annual Army-Navy football game which took place the Saturday after Thanksgiving, shoppers and tourists swamped the city on the Friday. This mass influx of shoppers and tourists resulted in chaos causing a security nightmare for law enforcement. It wasn’t until 3 decades later that the term ‘Black Friday’ spread throughout the country. In the 1980s the retail sector reinvented Black Friday to reflect the profits made post-Thanksgiving.

In the US in particular and increasingly the UK and Ireland, ‘Black Friday’ is seen as a “make or break” for retailers.  As the appinstitute.com infographic below shows that in 2017, sales during ‘black Friday’ rose by 11.7 percent to £1.39 billion. It also shows that since 2007, on-line sales have dominated ‘black Friday’ and now ‘Cyber Monday’, particularly in the UK and Ireland primarily using smartphones. In just 24 hours, Amazon earned US$1 billion.

To demonstrate the ‘globality’ of this marathon economic phenomenon, the above figures pale alongside China’s competitive equivalent.

While the ‘black Friday’ on-line sales (2017) in the US raked in US$5 billion, China’s equivalent – Alibaba’s Singles Day – earned US$25.3 billion in just 24 hours, taking less than 2 minutes to hit US$1 billion worth of on-line sales – 40 percent up from the previous year. Breathtaking.