Menu
Home / Features / Stories of Change / Can you catch the Energy Bandits?

Can you catch the Energy Bandits?

Students from Presentation College Bray were involved in an Energy Saving Project to meet the challenges of the Green Schools Energy initiative and mark Catholic Schools Week, and its focus on environmental issues, as per Pope Francis’ encyclical Laudato Si. 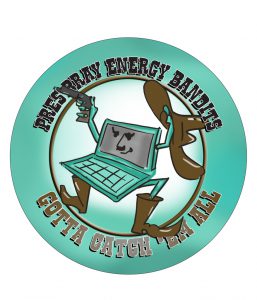 The school’s project showcased the artwork of students Luca Pezillo O’Brien, Ciaran McKay and Jack Lawlor around the school, in order to raise awareness about unnecessary energy usage, as well as a research project into whether the artwork has made a real difference to the school’s energy use. The project is an exemplar for the embodiment of the values underpinning a justice and value-based educational project

The school was in the process of applying for an Energy Green Flag from Green Schools, having received it’s first for recycling, the previous year. The art department had been planning an extra-curricular based project with this theme (energy usage) for the purposes of proactive cross-curricular engagement. At this point, the concept of respect, caring for the community and our home became an implicit theme underlying further explorations. You can listen to the lads discuss their project here. 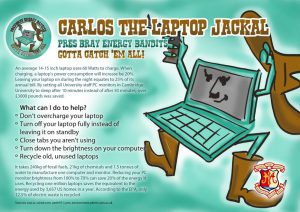 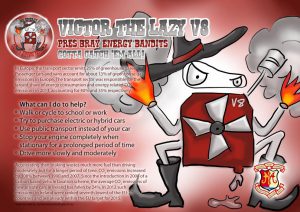 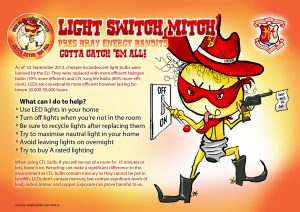 The project was initiated by art teacher Clifton Rooney and flourished through the work of Ciaran, Luca and Jack. The student mix was interesting. It began with one TY student and one first year student. The mutual respect shown for each other was inspiring as they both worked to their strengths towards the tentative goals set for them. The pair pushed each other and learned from each other. It is quite interesting as a teacher to sit back  and watch just how independent young people can be and how little direction they need when they buy in and then begin to form their own ends. In order for this to happen, the ends must be tentative. A predestined outcome is a sure way to stifle independent expansive thinking. It is however good to have some tentative plans in place as a starting point.

What was just as interesting was where the students recognised that they would benefit from divergent skills. The students chose to engage another TY student with a compliment skill set to expand the project. The self-reflection inherent in that action spoke volumes of their energetically developing ideas and the courage to look beyond themselves to realise those ideas was an act of great maturity.

The process was as follows: 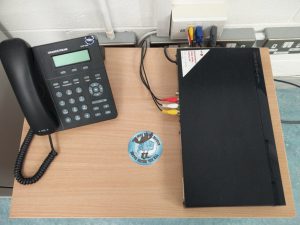 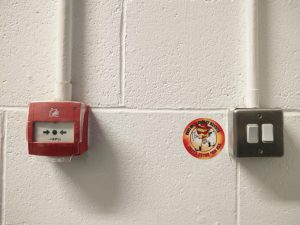 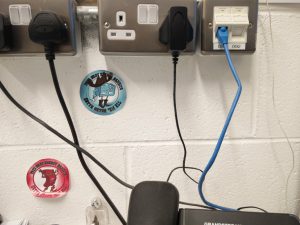 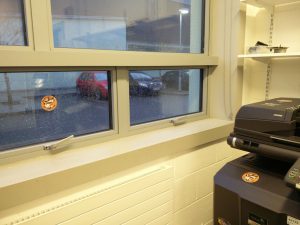 One activity/component of the project which was of value revolved around how we would communicate with our community. We generated something enormous in terms of its geographical and digital reach out of only 10 little drawings really. How did we do this?

It is difficult to establish the actual quantifiable outcomes of the project (even though we took controlled meter readings during the campaign) as the campaign fits within a larger picture of energy awareness and conservation within the school spear-headed by Stuart Hannon, Green Schools Coordinator. The school has certainly shown quantifiable improvements in energy conservation. 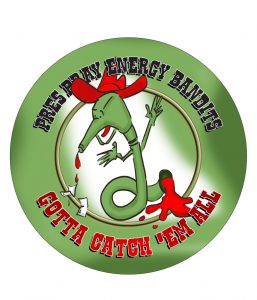 While we began with no plan to measure impact, it became more of an interest and priority to the group as the work developed. As discussed above, the quantifiable outcomes are difficult to isolate from the many other efforts within the school to meet the same ends. I personally found fascinating the use of the character’s names by students. I have overheard names like ‘Frank The Tyrant Tap’ or ‘Tree Munching Jim’ on many occasions during student-to-student conversations. Furthermore, students began collecting the stickers, which I was not so sure about at first but the strap line they included ‘Gotta catch ‘em all’ – an obvious play on popular culture but also referring to the idea that students were encouraged to catch out the Energy Bandits – often teachers, led students to the conclusion that they were meant to collect them all! I have many times taken up a journal decorated with the full compliment of stickers or overheard conversations such as “have you got ‘Pete the Pickpocket Socket’ yet”.

Towards the end of the school year, Luca, Jack, Ciaran and Mr Rooney carried out a small piece of research to assess the overall impact of their project. A comparison was made between the time frame of the project and the exact same time period from the previous school year. There was an overall saving on the school’s energy bills of as much as 9%! Lets hope that the students in Pres Bray continue to round up those pesky Energy Bandits and catch ’em all, for good!