A group of students from Trinity College Dublin joined other students from all over the world in calling on their university to stop funding activities that negatively contribute towards climate change.

Inspired by students from the US, a small group of students from Trinity College Dublin joined other students from all over the world in calling on universities and other institutions to stop funding activities that negatively contribute towards climate change and called on the board of TCD to divest its oil, gas and coal investments:

“We call on Trinity College and its subsidiaries to immediately freeze any new investments in fossil-fuel companies, and to divest within five years from direct ownership and from any commingled funds that include fossil-fuel public equities and corporate bonds.”

How We Did It

Five months into the campaign, on 30 March 2016, the College Board, along with the Finance and Investment committees, directly engaged with Fossil Free TCD and held a meeting to discuss the ethical and scientific arguments for divestment. At the meeting, Fossil Free TCD representatives presented the open letter with over 1,000 signatories. The meeting concluded with several members of the board agreeing with the reasons to divest.

Harnessing an array of digital tools as part of on-the-ground engagement to build a university-wide dialogue, the student campaigners:

The campaign built alliances with other student societies, most notably with the students union (TCDSU) since a mandate was introduced at a meeting of the union’s council on October 27th, 2015 and the Trinity Graduate’s Student’s Union (GSU), as well as environmental campaigning groups the Stop Climate Chaos Coalition and Trócaire.

The College Board announced their decision to sell as much as €6 million of fossil fuel company shares, including ExxonMobil and BP on the first anniversary of the Paris Agreement on Climate Change.

This also meant Trinity College would join the Divest-Invest movement, a global divestment campaign made up of over 670 institutions at the time.

Campaign success has inspired other student groups in Ireland, most notably NUI Galway in March 2017 and in Queens University Belfast in May 2017. TCD, in partnership with Trócaire, launched a national campaign – Fossil Fee Ireland­ in July 2017 as it seeks to offer support and advice to students in other third-level institutions yet to commit to divestment. 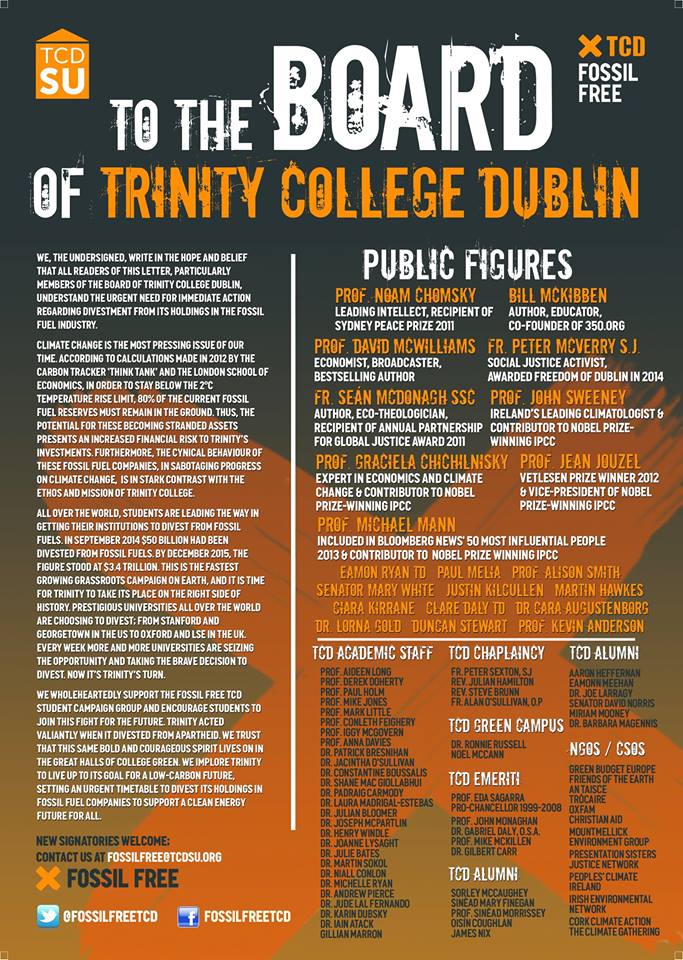 This Story of Change is based on a case study featured in #BeyondTheClick: a teaching toolkit for exploring global digital citizenship by 80:20 Educating and Acting for a Better World.