Art and SDG 14 – exploring the ocean and our shared future

A Senior Infants class from St. Patricks Loreto National School, Bray, Co. Wicklow undertook to explore the Ocean as a theme for the month of June. During this thematic exploration, an art project was developed by Ms. McDonnell (Teacher) and Clifton Rooney (Volunteer) to investigate the link between the Sustainable Development Goals (SDGs) and the Ocean. The students worked on individual art pieces which were accumulated and integrated into the production of a full class mural.

Why we did it

We had planned to do some artwork together at some stage during the year. ‘The Ocean’ was being explored as a class theme for the month. This theme provided an opportunity to link the learning of ‘normal’ class time with a global development issue; all through the medium of art.

Parents were asked to contribute recyclables to the project which was a good way to include them in the process. This connection between home and school is at the centre of any good learning experience and nurtures discussion. The parents got to see the work through the class dojo system and in the local press (a news item in local newspaper, The Bray People). 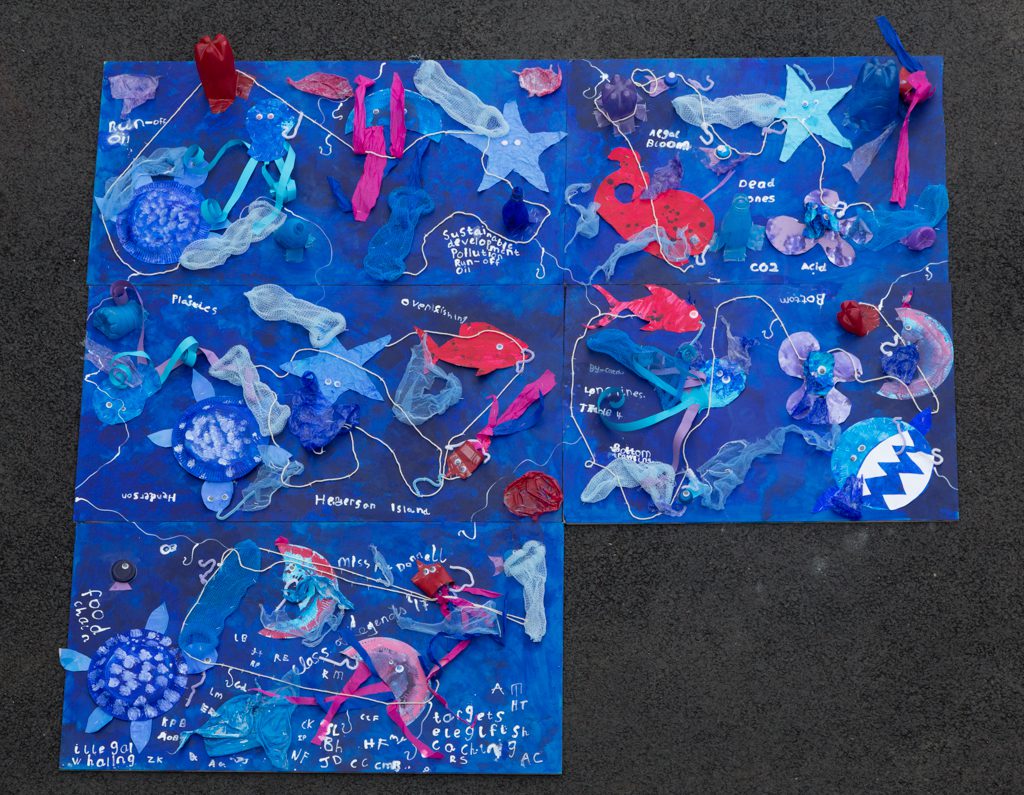 The class teacher and volunteer artist met to discuss potential ideas for the creation of a social justice art project around the theme of the Ocean. The project was designed for 5-6 year olds. With this in mind, we researched exemplars of the kinds of crafts produced by this age group. It was decided that each student would make a number of creatures and that students would be broken into smaller groups where each group was making different creatures, using recycled materials from home. Limiting the colour palettes of all the work to one segment of a colour wheel (harmonious colours) – so in our case; blues, pinks, purples, helped to ensure that the piece would read as a unit as opposed to a selection of individual pieces.

‘To Conserve and sustainably use the oceans, seas and marine resources for sustainable development’ – Sustainable Development Goal 14

A sample panel was created along with an example of each of the creatures which we were planning to create with the students. This helped to guide discussions between teacher and artist and acted as a useful teaching aid in process. The class teacher began introducing issues around SDG 14 into normal class teaching so that the art project would slot into the already established knowledge of the students. 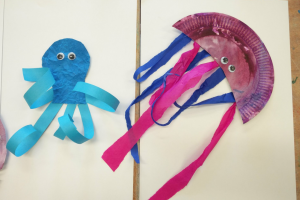 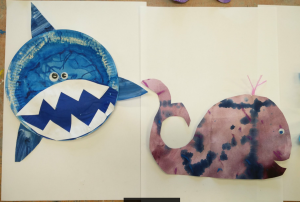 We began the project with the painting of the boards using sponges to create blends of various blues. When this was dry, they were all laid out flat in the locations they would sit within the context of the finished mural. The areas of overlap were then painted over to ensure seamless transitions. The whole piece was then gently glazed with ultramarine blue to darken and harmonise the piece; it was important that the background was low in visual noise so that it would provide a satisfactory background for the creatures.

We continued the project itself with the creation of individual creatures. Students were given the opportunities to explore normal art class learning and the associated elements of this before looking at the work from the perspective of a justice statement or as part of a group exhibition.

When the creatures were created, the students were introduced formally to some of the concepts around SDG 14. A picture heavy presentation was given exploring; plastics, global warming, acidification, algal bloom, run-off, dead zones, long lines, bottom trawling and whaling. They were then presented with their work and their boards and asked to lay out the work.

The students were then given words about the issues which they learned about and asked to write them on their pieces with broken pencils dipped in acrylic white paint mixed with water. This created a strong white line for the writing.

Unwittingly, the playful appearance of the children’s craftwork with beautiful colour harmonies and googly eyes created an unusual juxtaposition against the long line hooks, nets, floating plastics and challenging words written. It spoke something of the innocence of children asking difficult questions of their futures.

Finally, the students brought the boards outside and assembled them on the ground. We then discussed the work. It was subsequently placed in a prominent position in the school as an advocacy piece.

Yes, we succeeded in teaching around some of the issues related to SDG 14 in dynamic ways. Yes we succeeded in creating an art project which explored individuality in the context of a group work. The students’ work was also featured in local newspaper, The Bray People, which widened awareness about the project from the school community across the town.

As the project was a standalone piece, it is difficult to measure impact other than to say that the reflection component of the process showed enormous understanding of complex issues.