Saving the Children? 22 students take on a newspaper

A group of students debated a feature in the Times of Malta on a Maltese missionary priest in Ethiopia and decided to contact the newspaper on its coverage, Colm Regan reports. 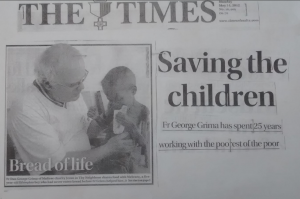 We initially discussed and debated an article published on the front page of the Times of Malta entitled ‘Saving the Children’ which described the work of a Maltese missionary priest; a story which we felt displayed many of the failings of journalism when reporting western projects in Africa – Ethiopia in this instance. The article attempted to remind readers of the inequity occurring around the world when children die of readily preventable causes. 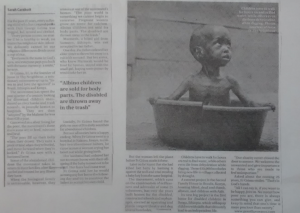 For us, it offered a simplistic solution, in this case individual charity donated to a Maltese charitable organisation working in Ethiopia. And, in doing so, in our view it managed to avoid most of the important questions that need to be asked.

We decided to draft a response and to engage with the paper on the issue.

The students reviewed the article in class and spent some time debating its content and approach in addition to reviewing various articles and blogs on reporting stories such as these. We explored the Irish NGO platform (Dóchas) Code of Conduct on Images and Messages and used it to stimulate additional discussion. Our debates revolved around two issues essentially – how best to approach the paper as regards tone and content (we wanted the paper to consider its approach and not simply dismiss our views) and whether codes such as the Dóchas one are practical and actually implementable.

Eventually, after considerable debate, we drafted our response to the Times and forwarded it on.

In our response, we decided that it was important not to attack the paper or the contributing journalist or the missionary priest involved. We felt doing so would risk being accused of a personalised critique rather than a discussion of the principles and broader issues involved. This tactic worked in that it allowed us to focus on the issues and avoid being perceived as a group of (mostly foreign) university students attacking a well-intentioned Maltese approach to hunger.

Initially there was resistance in the paper to including our response (this we learned subsequently in discussion with the Times). The paper decided to publish our response online but not in the printed edition.  Following additional communication, the piece was published in the printed paper.

There then followed some discussion and debate online with most of the comments made to our response being essentially negative – we were seen as attacking a well-intentioned missionary priest who was experienced in the field; as being university students with little ‘real world’ experience and as being more concerned with theories and ideas rather than with feeding the hungry.

There were some segments of the report (which essentially argued that an Ethiopian father ‘threw away’ an unwanted blind daughter on to a rubbish tip – a segment we found particularly unacceptable) which generated considerable emotion and response. In this context, we feel we did achieve one of our key goals – raising discussion and debate on the issue. We also know from discussions with staff at the paper that the issue was debated internally in the paper and had impact on a subsequent story on orphanages in Peru.

We have subsequently learned that the article and our response has been used as a case study in other courses at the University of Malta.