Menu
Home / Features / Stories of Change / What if a rocket landed in Dublin?

What if a rocket landed in Dublin?

On the 14th of March 2016, Dublin-based artist/activist Will St Ledger installed a fake, un-exploded missile on South King Street in Dublin to mark the fifth anniversary of the Syrian crisis. Ciara Regan reports on this public stunt, which captured the attention of Dubliners as they went about their daily routines.

‘I was commissioned by GOAL to build the structure to mark the fact that rockets and missiles continue to land in civilian areas in Syria every day, killing innocent men, women and children.’

Went to @WillStLeger‘s #NowYouKnow installation after 5yre of Syria bombing. Stark execution (in more ways than one) pic.twitter.com/O2Gl9rqTcS

In Syria, rockets kill 40 civilians a day, nine of them children a day in the first two months of 2016.  180 rockets and missiles landed in one province in Syria similar in size to County Galway

Over 12 million people have been forced to flee the country since the start of the war.

On the 14th of March 2016, Will St Ledger installed a fake, un-exploded missile on South King Street in Dublin to mark the fifth anniversary of the Syrian crisis. The advocacy campaign was aimed at bringing home the reality of life in a war-torn country like Syria, according to Barry Andrews, GOAL CEO:

‘We don’t want people in ten years time saying ‘I wish I had known then what I know now’ so we’re confronting people with the reality of what it might look like here today’.

It was the hope of GOAL that projects like this would help to inform opinion about the refugee crisis, about radicalism and would hopefully start conversations that perhaps aren’t being had at this time.

The un-exploded missile was constructed, using various salvaged materials. It was be placed in a ‘hole’ on the pavement, created using sand and pre-smashed paving stones. Special effects were created by coal dust for blast scorch and smoke, along with a number of other elements. GOAL wanted to highlight the ongoing suffering of innocent civilians in Syria, as the latest round of peace talks on the Syria crisis begin in Geneva the day after the installation.

Leaflets were distributed around the installation site along with markers showing the damage done and kill radius of such weapons. 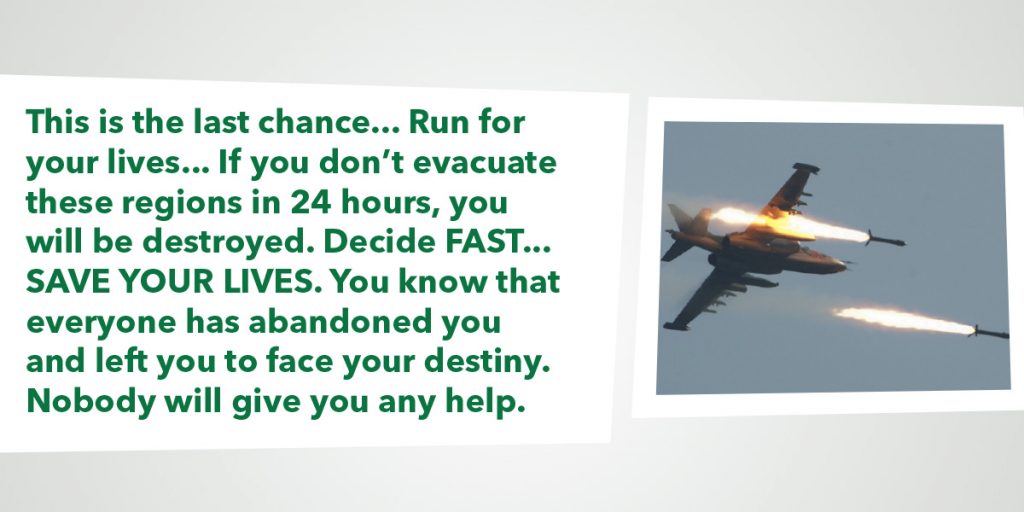 On the day of the installation, there were numerous reports in the news (such as the Irish Independent,  TheJournal.ie and on radio) and pictures of the rocket with #nowyouknow shared widely on Twitter. People also appeared to be sharing facts about Syria itself too and approximately 70 people signed up to the #knowyouknow campaign.

Will St Leger and GOAL were successful in creating a buzz and conversations around Syria and what are, unfortunately, every day occurrences there.

For more information, visit the development education section of the GOAL website.

Stop dead in your tracks work from @GOAL_Global to raise funds for its work in Syria (via @GillenMagic) #NowYouKnow pic.twitter.com/bUzYeZVo8i