One World Our World is a beautifully illustrated storybook containing five stories from focus countries that Irish Aid works in.

As well as case studies, this storybook includes maps, fact files, general country information and a ‘what we do’ feature about Irish Aid’s work – the Government of Ireland’s official agency for international development. 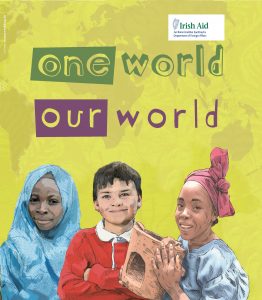 “In One World, Our World children from Ethiopia, Tanzania, Malawi and Mozambique, which are all in Africa, and Vietnam, which is in Asia, tell us about the amazing wildlife, landscapes and food in their countries, and they tell us the stories of their lives, the things that make them happy and sad and their hopes and dreams for the future.

There are fifty-four countries in Africa, but I didn’t know how different each of them is, or what an interesting place to live Vietnam would be, until I read this book.

Do you know what Hakuna Matata means, or which languages children in Mozambique speak, or if Christianity reached Ireland or Ethiopia first? If you read “One World, Our World” you’ll find out and maybe like me you’ll get so interested in our focus countries that you’ll want to visit them one day!” – opening, by Shane from Ireland.

This resource has been developed to teach children from 4th to 6th class about how children live in five other countries and about Irish Aid’s work in those countries.

It includes a number of curriculum links, including:

Strand Unit: People and other lands

Social, Personal and Health  Education: Strand: Myself and the wider world

The first edition of One World Our World was published in 2009.