It is sad but necessary that these photos exist 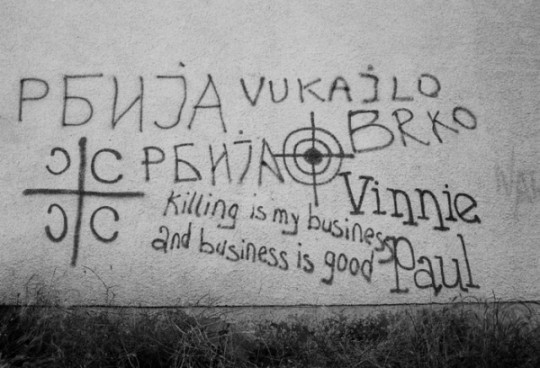 Image: Serbian graffiti on a wall in Kosovo in 1999

Tom Stoddart began his photographic career in a local newspaper in the North-East of England before moving to London in 1978. He has witnessed and photographed many international events such as the fall of the Berlin Wall, the election of President Nelson Mandela and the siege of Sarajevo, to name but a few. More recently, he has published and exhibited extensive work on the AIDS pandemic in Africa.

Usually it is the photo that does the talking. In this case Tom wrote a message that accompanies his photos and his experiences and is a poignant reflection on the dilemmas that haunt all photojournalists:

It is sad and unnecessary that any of these photographs exist.

Most of the events chronicled here can be attributed to mankind’s greed, intolerance, prejudice, inhumanity, lust for political power and sheer stupidity.  The siege of Sarajevo, ethnic cleansing in Kosovo, famine in Sudan, AIDS in Africa, devastated post 9/11 New Yorkers – generations of lives needlessly wasted.

The people portrayed in the preceding pages are heroes. Real heroes, unlike those shallow icons from the worlds of cinema, fashion or football, so carefully manufactured to sell movies, newspapers, cars and sunglasses.

Innocent people trapped and battered by circumstances beyond their control. Ordinary humans in extraordinary situations, displaying immense courage, sacrifice, dignity and determination to survive what has befallen them and their loved ones.

So don’t feel sorry when you look at these pictures – feel angry that we need to be reminded of such folly.

It is sad but necessary that these photos exist.

Stoddart’s images and message pose some questions about our responsibility in using these stark, difficult images of poverty and conflict. In using them, are we trying to humanise poverty and underdevelopment? Are we respecting the dignity of the people concerned? Or are we potentially perpetuating a stereotype through inaccurate representations?

To see some of Stoddarts work, visit his website here or see our photos section with a collection of his work