Menu
Home / Blog / ‘Every time they are doing a cutting, the singing gets louder so you can’t hear the screaming’

‘Every time they are doing a cutting, the singing gets louder so you can’t hear the screaming’

Across 29 countries within Africa, and more than 125 million women and girls cut, Female Genital Mutilation/Cutting (FGM/C) continues to be practiced from the Atlantic Coast to the Horn of Africa and beyond with wide variations in the percentage of girls and women cut within and across each country.

More than half of these women now live in just three countries: Egypt, Ethiopia and Nigeria.

Published in July this year, a UNICEF report has revealed 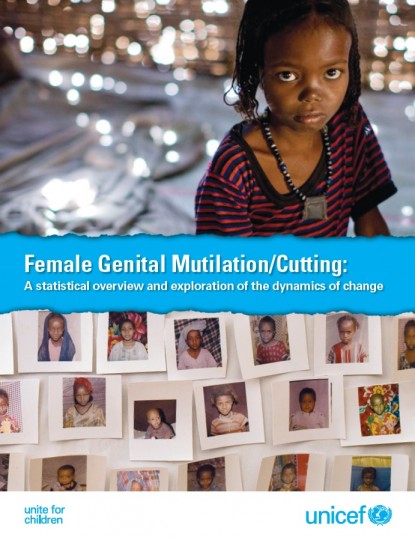 the disturbing facts and figures on the continuation of FGM/C, despite the apparent opposition to it (in 19 out of the 29 countries listed in the report, the majority of women and girls believe it should end).

UNICEF believe that ‘obtaining timely, comparable and reliable information on FGM/C is a key aspect of efforts aimed at promoting its elimination’. They also believe that the ‘wealth of information available in this report can be used by governments, international agencies, civil society and other development partners to fine-tune strategies seeking to encourage the abandonment of the practice’.

Below are some facts and key findings from the report.

Who: In half of the countries, the majority of girls were cut before the age of 5. In the remaining countries, cutting occurs between the ages of 5 and 14. However in some countries, the cutting happens as young as one month old.

How: Across the majority of countries, most daughters have had their genitalia cut in some way, with some flesh removed.

By Whom: In nearly all countries where FGM/C is concentrated, traditional practitioners perform most of the procedures, with the exception of Egypt where 77% of cutting is carried out by medical professionals.

Why: Social acceptance is the most frequently cited reason for supporting the continuation of the practice.

Key Facts from the report

Somalia: 63% of girls who underwent FGM/C had their genitalia sewn shut

Guinea: 19% of girls and women think FGM/C should stop, compared with 42% of men

Eritrea: 60% of girls and women regard FGM/C as a religious requirement

Mali: 55% of girls who have been cut are daughters of women who oppose the practice

Gambia: 82% of women and girls who have been cut believe the practice should continue, compared to 5% of women who have not been cut

Mauritania: On average, girls were cut when they were just one month old

Chad: 27% of boys and men think that FGM/C is required by religion

Cameroon: 85% of boys and men think FGM/C should not be continued.

Key Findings from the report

Case study: Blood on the leaves – Ending FGM/C in Côte d’Ivoire by UNICEF

UNICEF video | length 5:05mins | 2013 | In Côte d’Ivoire, where 36 per cent of women have been victims of genital mutilation, the practice is increasingly becoming a thing of the past as victims and a former excisionist speak out to raise awareness of its cruelty and its dangers.

Note: the title of this blog is taken from a quote from FGM/C survivor Sarian, now in her 30s, who was mutilated when she was 11.

Ciara has written on FGM/C on this blog previously on the International Day of Zero Tolerance to Female Genital Mutilation/Cutting (FGM/C), 6th February 2012.