Information is powerful. Think Africa is a short video that collects the opinions of festival goers from the 2013 Electric Picnic in Stradbally as they consider what words come to mind when they think of ‘Africa’. Paying homage to Bob Dylan’s music video for Subterranean Homesick Blues this Self Help Africa production is an interesting experiment in what happens once you add some positive facts about Africa and ask participants to repeat the exercise. 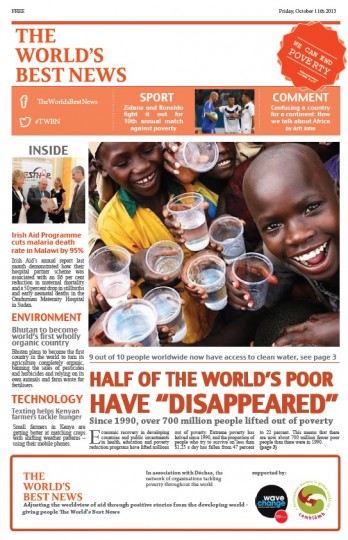 Seeking to adjust the worldview of overseas aid in a hostile economic environment in Ireland, the newspaper sought to highlight the remarkable progress in the fight against extreme poverty. A joint initiative led by Dóchas, Comhlámh and Wave Change the stories challenge the ‘crisis and disaster’ media coverage of aid issues that typically frame what is written about the developing world.

“…is about telling the story of the historic and unprecedented revolution that is slowly unfolding behind the headlines: the unreported reality of steady and unrelenting improvement in human lives right across the world.”

Take your pick. There are plenty of reasons to be proud of Ireland’s strong commitment to overseas aid work over the last decade.

You can catch Franziska Fehr’s blog on the day as one of the volunteers that worked the beat handing out newspapers. A great spot of public education on development issues – well done to all involved and looking forward to the next edition in the series!

Staying positive and imagining a better world. 1,000 copies of the Be Well Times, a “for news we would like to read” venture from Hi-Rez Youth Centre, were dropped on the town of Bray in County Wicklow on Thursday 10th October as part of Be Well Week – a local initiative of young people promoting a practical and positive outlook within youth mental health. 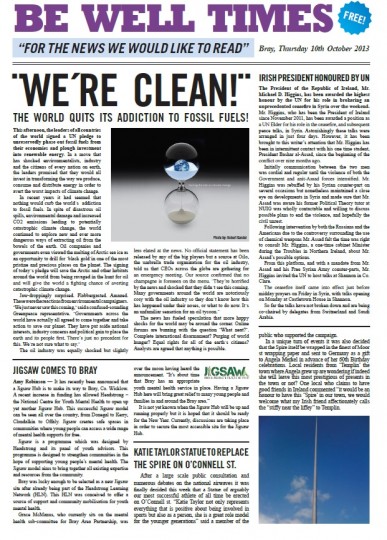 Taking their cue from The Yes Men’s special edition parody of the New York Times in 2009, the “what if?” good news stories present the kind of news that we would like to read rather than the sombre tales of recessionary Ireland and dead end Celtic Tiger economics that readers are exposed to on a daily basis.

The stories imagine alternative futures across a range of development and human rights issues such as passports and migration, the phasing out of fossil fuels, the perils of affluence, President Michael D Higgins brokering peace in the conflict in Syria, a tongue-in cheek look at the what happens when the markets take over the education system plus an African troika made up Ghana, South Africa and Rwanda looks to support universal healthcare for Ireland through a new aid programme.

The newspaper is a fantastic local initiative led by the youth club members that delivers on dreaming big. Download a copy of the special edition Be Well Times (PDF 1.64MB) and follow the week’s events on Twitter #bewellweek13.

What would your good news for tomorrow look like?

#LivingWage: support the call for retailers to pay a living wage. A new campaign launched today by Clean Clothes Campaign Ireland (CCC) is calling on clothing companies to pay a living wage to garment workers by 50c more an hour per garment. Those in Dublin may have noticed the campaign getting an early start this morning:

Paying just 50c more to a garment worker is the difference between living in dignity or spiraling poverty. The campaign is calling on:

The #LivingWage campaign begins with a week of action in 15 European countries:

“The campaign launch comes exactly six months after the devastating collapse of Rana Plaza, in which 1,133 Bangladeshi workers were killed. Six months on from the largest industrial accident to hit the garment industry, millions of workers continue to have no choice but to risk their lives in order to afford a decent life.”

As consumers, we exercise our power over companies every day of the week through the choices we make when we exchange money for products or services. Consuming ethically, however, is another matter entirely and one we’ve previously featured on this website. This is an important campaign to watch – and get involved in!