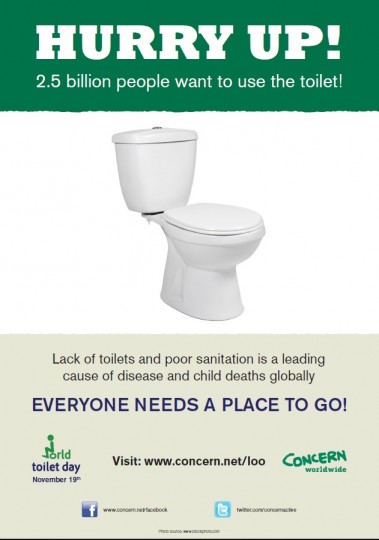 Yes, there really is one, it’s on November 19th. Go on smile, have a little laugh even, it’s perfectly alright; the man from the United Nations said we probably would. In fact, he said

“The amusement and laughter likely to follow the designation of 19 November as ‘World Toilet Day’ would all be worthwhile if people’s attention was drawn to the fact that 2.5 billion people lacked proper sanitation and 1.1 billion were forced to defecate in the open.”

We all know that without toilets, untreated human waste can impact a whole community, affecting many aspects of daily life and ultimately posing a serious risk to health including child malnutrition.

Beyond health there are societal impacts, such as teenage girls often leaving school at the onset of menstruation due to lack of privacy and the risk of attack or rape associated with being forced to defecate in the open during nightfall.

Every year more children die from diarrhoea related disease than from HIV, malaria and tuberculosis combined.  This situation could be solved simply by providing improved water, sanitation and hygiene facilities.

Despite the scale of the crisis, sanitation remains a low priority for governments and recent efforts to address this fall far short of what is required.

The simple fact is that toilets are one of the best investments a country can make with a rate of return of more than $5 dollars for every $1 invested.

There is growing evidence showing the social and economic benefits for households, businesses and the wider community, such as increased productivity through time gains and health benefits, increase in tourism revenues through clean environments, a strong reduction of health costs by avoiding treating sanitation related diseases, higher levels of education, and other benefits related to dignity and safety.

The Millennium Development Goals (MDGs), agreed by governments in the year 2000, outlined clear and ambitious targets for water and sanitation provision by 2015. Efforts over the past decade have yielded some progress.

The World Health Organisation declared the target for water supply as being met in 2010, with 2 billion people gaining access to improved water since 1990. Unfortunately, this achievement is somewhat overshadowed by the fact that achievement of the MDG target for sanitation now appears beyond reach.  The number of people living without improved sanitation is disproportionately high in South Asia and sub-Saharan Africa.

Water and sanitation programmes are a key component of Concern’s overseas work contributing to the organisation’s strategic goal to “significantly improve the health of extremely poor people”.  Specific attention to urban sanitation is seen as essential as rapid rates of urbanisation mean that, by 2030, almost five billion people will live in towns and cities, with urban growth most concentrated in Africa and Asia.

Approximately one billion of the world’s population are already living in urban slums where lack of access to safe toilets and proper sanitation is most acute.

The sad fact is that, like so many ‘development’ issues, there are solutions out there that are not yet impacting the lives of the world’s poorest and most vulnerable people.

Solutions ranging from the most basic construction of latrines to higher tech versions that include the creation of waterless and hygienic toilets that don’t rely on sewer lines and that can store and process waste into fertilizer, energy and even drinkable water.

But like so many ‘development’ issues we still need the political will and financial support to make them a reality.

Think you know the average number of visits we each make to the toilet per year or whether access to clean water and basic sanitation is a human right? Take the World Toilet Day true/false quiz and download it or share it with others today.

Yes we can still have a smile about it, but it can also be a reminder that we all have an urgent role to play in supporting national and international efforts to improve access to sanitation for all.

You can do this by:

If you wish to learn more about this vital issue, see www.worldtoiletday.org or visit the water and sanitation guide in the Shape of the World module on DevelopmentEducation.ie