Menu
Home / Blog / Notes from Kampala: a thought for your Apples

Notes from Kampala: a thought for your Apples

Did I put it somewhere safe and now can’t remember? Perhaps someone has ‘taken’ it?! I wake up in the middle of the night and search for it. It’s not there. I can’t find it. For days now my mind is preoccupied with finding my iPod. It’s got years of music and iTunes on it. I spent hours loading CD after CD into the PC (revealing my age now?). I need to find it.

Then I hear that Apple are laying to rest my beloved iPod! Now, not only am I frantic, I’m angry. How dare they! It’s not 10 years since I bought mine! I’m still paying the monthly insurance on it. And then there’s my iPhone 4. I dropped it and cracked the screen– again. They tell me it’s not worth fixing – it too is becoming obsolete, Skype reminds me. Same thing with my printer (thankfully not Apple this time): ‘it’s not worth fixing…cheaper to buy a new one’ they tell me.

So now, I’ve no music, no phone with immediate access to emails – or FaceBook, and no printer. I feel… lost. Need a new iPhone, need a new iPod and of course a printer.  And while I’m there, nearly everyone has an iPad so one of those should go into the basket too.

So why am I sharing with you my tales of woe and what’s it got to do with Development Education?

Last month, I moved to Uganda. Uganda is a beautiful country with immense diversity throughout. It’s situated right on the equator in East Africa, contributing to its tropical climate and abundance of flora, fauna and wildlife.

It has more average rainfall in its capital city, Kampala, than in Dublin – 1,225 millimetres compared to just 733 mm – so no more moaning about the rain! Known as the Pearl of Africa, it’s considered the best location among the world’s greatest places for birdwatching, safari’s, overlanders, boating, fishing, extreme sports, etc. It’s the source of the River Nile that eluded Dr. Livingston and one of the 3 places in the world to go gorilla trekking. Landlocked by 5 countries – South Sudan, Tanzania, Kenya, DRC and Rwanda – Uganda has the mighty Lake Victoria and the River Nile as its water sources.

It is also home to some of the best coffee in the world. And no, I’m not on commission from the Lonely Planet guide!

Despite such great beauty and natural wealth, Uganda remains a ‘low income’ country as defined by all of the international agencies. The reality is that some 38% of the population are currently living below the poverty line of $1.25 per day or at the more recent value of $2 per day, 35% of the total population.

If you were to say imagine that this was the case in Ireland that 35% of the population were surviving on $2 per day then it would account for 1.63 million people. In Uganda, living on or under the poverty line directly affects 12.25 million people.

It’s no surprise that the average life expectancy for a woman is 55.4 years and 53.8 years for a man (compared with Ireland 83.2/78.4 years). The infant mortality rate is 72.3 – which means that for every 1,000 children born there is the probability of 72 dying before they reach the age of one (for Ireland the figure is 3.2).

The country is ranked by the UN as 161 out of 187 countries and features in the low human development category, with a HDI value of 0.456.

Uganda has struggled in terms of its fight against HIV and AIDS. It was one of the first countries on the continent that reduced its median HIV prevalence rate of 22% in the early 1990s to its lowest of 5.2% in 2006. Unfortunately this trend is no longer the reality. Today the prevalence rate is steadily rising, and is currently at 7.4% of the population living with HIV, with new infections said to be around 130,000-150,000 per year.

With the departure of Kony and the Lord’s Resistance Army wreaking havoc in the north of the country, Uganda is one of the more stable and safer countries on the continent – at least it was until the recent discovery of militant Islamists al-Shabaab , originating from Somalia.

Kampala is a vibrant and bustling African city. 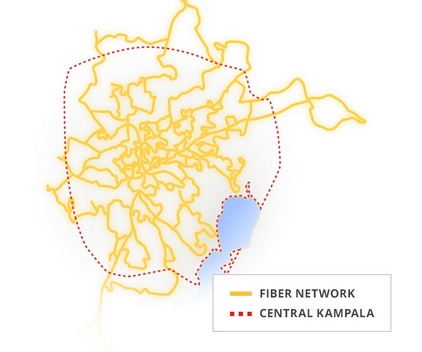 It has been selected by Google through Projectlink as its first project for improving internet speeds in a “Modern city ready to connect on a bigger level.” This is already underway with mountains of cables protruding throughout the city.

The number of people utilising the internet in Uganda has increased from 1.7 per 100 inhabitants to 13 in 2011.  This is compared to 41.6 and 76.8 in Ireland respectively. Certainly, better broadband is an exciting prospect, particularly for me whose work and study is primarily internet based – and of course, who can afford it. It would be interesting to survey how many people among the city’s 1.6 million people have smartphones for example, with regular access to the internet and the means to resource this.

In my (limited) experience, using data on your phone without a contract makes you a regular visitor to the top-up shop. My sense is that the infrastructure for broadband in the city is limited, and that uptake, while most welcome among the 1.6 million people, would be difficult to directly connect to.

But at least Google are doing something.

This is where I get to the point about my iPod.

Breaking – and potentially losing my Apple products reminded me that I was lost in the quagmire of consumerism and materialism. I lost sight of the reality of the world around me, of my connection to the world and its issues – and its people.

It made me think about the times I had replaced old with new, sometimes when there was no need – ‘upgrading’ is what the phone companies call this. I used to cringe when someone would ask me ‘do you really need it?’

When you live in Uganda you realise that a new phone costs more than someone’s annual salary, the idea of ‘need’ takes on a very different dimension.

Add to this the consideration of the impact on the environment and the cost of human suffering to service my ‘upgrade’ or replacement.

With the recession in Ireland nearly behind us and productivity figures turning into positives the capacity (and opportunities) to ‘upgrade’ will once again filter into our lives. My challenge to you is to consider the definition and wider impact of your ‘need’ and to take on Apple’s invitation to:

Mining for smartphones: the true cost of tin report by Friends of the Earth UK | 2012

11 facts about e-waste on dosomething.org