Menu
Home / Blog / What does signing the Paris Agreement mean to young people in Ireland?

What does signing the Paris Agreement mean to young people in Ireland? 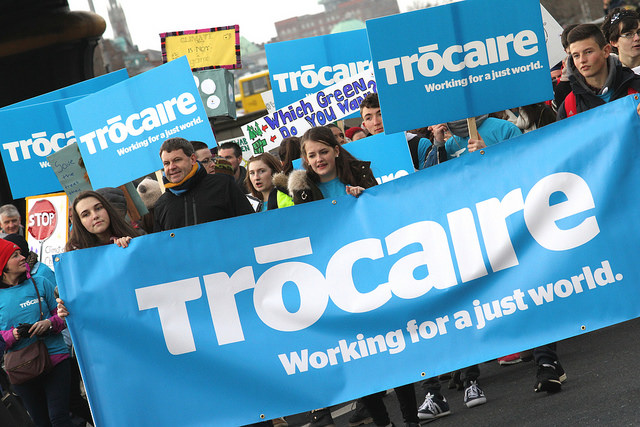 And today United Nations Secretary-General Ban Ki-moon is inviting leaders from all UN member states to attend the official signing ceremony of the Paris Agreement on Climate Change.

This is a historic day for international action on climate change, a day which young Trócaire activists have been eagerly awaiting.

Five months ago, 28 young people from across the island of Ireland took part in Trócaire’s annual Climate Change Challenge. This was a deep experiential learning programme over four days that explored the causes, effects and actions needed to tackle climate change.

As part of the weekend, on Sunday 29 November, these young activists took part in the Dublin People’s Climate March.

They joined thousands of other activists to demand that political leaders attending COP 21 in Paris set aside their differences and agree on a strong and effective global plan to tackle climate change.

One such Climate Change Challenge activist is Noelle Healy, a student from Milstreet Community School in county Cork.

Remembering the day of the march, Noelle said:

“I learned a lot from the march and I will never forget the experience. It made me feel like my actions made an impact, that my voice and opinions on climate justice were heard and I that I made a difference in the world.”

“I got to march with 5,000 people who felt the same way I did about climate change, it was inspiring.”

The climate change impacts already being felt in developing countries was a critical issue for the young activists.

The ‘Paris Agreement’ represents a welcome milestone in uniting the world against climate change. However, the deal contains significant weaknesses, not least the absence of human rights and the protection of the world’s most vulnerable people.

When asked how she hoped the Paris Agreement will impact people in developing countries, Kaytlin Murphy responded

“We in the global north are causing most of the damage resulting in climate change but it is people in the global south that are affected the most. This agreement shows everyone how people all over the world can work together to keep global warming below 2 degrees Celsius.”

There are still a few steps remaining before the Paris Agreement comes into force.

For one year, from April 22, the Agreement will be open for signing by member states. Then countries will need to engage in a national process to accept the Agreement in their own country.

When at least 55 countries accounting in total for at least an estimated 55% of the total global greenhouse gas emissions have accepted the agreement, it will then be implemented.

“Signing of the agreement is a historic day which gives prominence to a pressing issue that we face today. It will mark the beginning of a journey to stand together in the fight for climate justice,” said Amy Logan, a student form St Comhghall’s College in county Fermanagh.

Leah Fields also agrees with the significance of the event at the UN Headquarters in New York.

“When the leaders come together to legalise the agreement from COP21, it will become an important feature in current and future generations.”

But our young activists are not leaving change in the hands of world leaders. Following the Climate Change Challenge, many have made personal behaviour changes and are spreading the word about the need to act locally for climate justice.

“I have started to make small changes in my everyday life to help stop climate change; such as turning off switches when they aren’t being used, starting to buy Irish products, spending less time on my phone and sharing what I have learned with my family and friends.”

These young people are keenly aware that their peers need to realise that their own actions are contributing to climate change, and to encourage them to be part of a more just future for our people and planet.

“I hope that the young people in Ireland understand the seriousness of this issue and know what they can do at an individual level to help both the current situation and the future” comments Amy Logan, “I have tackled the issue by raising awareness through class presentations in my school; I hope the students will make small changes like recycling, as this will have big effects.”

Noelle Healy hopes that young people will embrace their power,

“I’d like to see other people in Ireland become more aware of the causes, effects and solutions of climate change. If people knew more about climate change they feel more motivated to do something to help tackle the issue. Young people have the opportunity to change outcomes when they work together. Knowledge is power.”

Kaytlin Murphy feels there needs to be more opportunities for young people to engage with the issues of climate change:

“In school we ran a Climate Change seminar with Trócaire and seven other schools in our area. I think this should be done all over the country as it makes young people my age more aware of climate change and it would help them to understand ways of causing less harm to our environment.”

So while the United Nations Secretary-General Ban Ki-moon uses his influence to secure the ratification of the Paris Agreement, young people such as Amy, Leah, Kaytlin and Noelle will continue to exert their passion and influence over peers and their wider community.

For Trócaire’s Development Education team, COP21 was not the end of the climate action journey but merely the beginning. As we enter into the third year of our programme on climate justice, we will seek more opportunities to partner with young people, their educators and institutions.