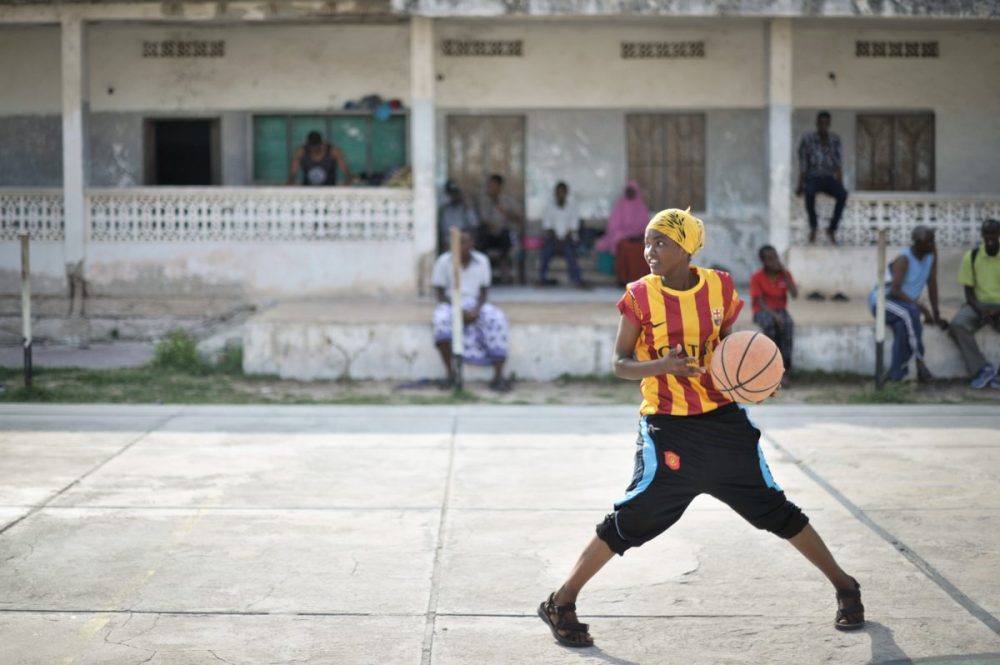 Basketball – More than Just Fun and Games. A final-seven finalist in the 2018 Trinity College Dublin and developmenteducation.ie Development Issues series, Jane Litvin explores how some of the Sustainable Development Goals can be realised through basketball.

My host-sister, Noemia, and I share something in common; we both love basketball. We watch the NBA finals together every year, wearing our Steph Curry jerseys, staring in awe as he dribbles past Lebron and nails a three-pointer from thirty feet away. We shoot around early in the morning at the court down the street and cheer each other on from the sidelines when we play for our schools. Basketball will always be an important part of our lives, but for very different reasons.

I grew up in the small suburban town of Hastings-on-Hudson, New York. I live in a global superpower of a country, one with a human development index of 10 out of 195 countries and an average life expectancy of 79 years. As a teenager in the US, basketball taught me how to listen, how to be disciplined, and how to be a strong female leader. Though my basketball career ended promptly after secondary school, the lessons it taught me continue to impact my life and my work ethic to this day.

Noemia grew up in Matola, a suburban town in Mozambique. Mozambique has a life expectancy of 55 years, a human development index of 181 out of 195 countries, and a 15% prevalence rate of HIV&AIDS among women ages 15-49 . Noemia played for her secondary school, and also for the U-16 national team. For her, basketball taught her more than just a lesson in discipline – it changed the course of her life. In Mozambique, sports are more than just recreation – they are a form of development. Various NGOs and the Ministry of Sport in Mozambique organise sports programmes which are designed to improve the quality of life of it’s citizens.

Sport as a key driver of the Sustainable Development Goals

According to the UN’s report on sports and development, ‘the fundamental elements of sport make it a viable and practical tool to support the achievement of the MDGs,’ or Millennium Development Goals, which promoted a holistic approach to development. Sport is a creative tool which can greatly contribute to the realisation of the Sustainable Development Goals (which followed the MDGs as a key international framework for action on international development, human rights and more sustainable livelihoods), with a particular emphasis on gender equality and empowerment of women and girls (SDG 5).

Training for teams in Mozambique can encourage young women to realise they are not limited by their gender, despite the patriarchal culture that persists in their society. Basketball gives these women a way to feel physically and emotionally stronger through their work on the court and the ties they make with coaches and players. It also teaches them life skills, like discipline, a strong work ethic and the value of teamwork. This encourages more women to enter the workforce and pursue careers, not just be caretakers.

In recent years, through the help of NGOs such as Basketball Without Borders, basketball has also begun to help combat the HIV&AIDS epidemic in Mozambique, especially among young women, where the disease is rampant. Basketball practices often include life skills sessions where girls learn HIV&AIDS prevention measures from their coaches and even professional players who visit the country to help combat the epidemic. When these role models speak about the disease with young girls, they begin to normalise the conversation about safe sex and break down the stigma behind getting tested for HIV&AIDS.

This technique has been proven to be effective and according to the UN:

The groups most at risk of contracting [AIDS] – women and young people, especially girls – are known to be highly responsive to targeted sports initiatives.‘

UN reports also show that participating in sports helps young women take ownership of their sexuality, ultimately ‘encouraging them to delay sexual activity‘. This informs women around safe sexual practices and delaying childbirth until they are ready. The by-product of participation in sports can be life-changing, in potentially raising the life expectancy for women in Mozambique and lowering the prevalence of HIV&AIDS.

Noemia’s talent brought her to the USA, a developed country with a higher lifespan, a lower rate of HIV&AIDS, and a greater degree of gender equality. She attends a prep school that will one day send her to a division one university and hopefully to the WNBA, ultimately fulfilling her childhood dream. But she wants to eventually return to Mozambique, where she can serve as a role model and a leader to a future generation of female players.

Basketball, a universally beloved sport, is taking on a new role. It’s become a vehicle by which countries can develop and the lives of its citizens can be transformed. I didn’t understand the true power of basketball until I met my host sister – now I realise it’s so much more than just fun and games.