That’s a wrap from me on the live-blog for today.

We’ll be back with more round-ups of the global reach and impact of the global school strike. Thanks for the emails and tweets and photos! We’ll ready more for sharing on the website after in the coming days once we’ve sifted through the mountain.

(ps – the Dublin march was reportedly attended by upwards of 10,000 people and the Cork march of around 5,000 students. We’ll be back to share the national and global tallies!).

A couple of op-eds

Sophie Sleeman has written an opinion piece in The Guardian on the power of the student strikes:

In ant colonies, large populations are sustained through the interactions between individual ants. There is little centralised authority in the most resilient colonies. On social media, teenagers have also been swept up in self-organisation, spreading their message from group to group, country to country, with the only central authority being the collective fear we all share.

Only a few months ago in Dún Laoghaire, there was a spillage of millions of plastic shards from a building site right into the sea, doing unimaginable damage to the ecosystem right beside where I live. There was an attempt to clean it up by the local people, but it was mostly left unnoticed. This sort of thing, and much worse, is happening all the time and we are doing almost nothing to stop it.

Keeping up with the landslide of photos, videos and updates on social media will need ten people working around the clock for a year to dig through. In saying that, here are some more updates from school strike events around the world.

(start with this slideshow curated by The Guardian)

Today, hundreds of thousands of young people around the world walked out of school to protest against inaction on climate change. Did you join in? Tell us what the experience was like 👇

Matthew Taylor of The Guardian (UK)

Some of posters on display at #schoolstrike4climate london march pic.twitter.com/IBJHQ6hgtv

London #schoolstrike4climate on Westminster bridge now being warned they’ll be arrested unless they move pic.twitter.com/PO6ZElb03f

BREAKING: 150,000 people lined the streets in #climatestrike marches in 60+ locations around Australia today!! Do you hear us @ScottMorrisonMP @billshortenmp? Our movement is growing! Read our release here > https://t.co/kZQTAw1slK #climatestrike #ss4c #StopAdani pic.twitter.com/sCbznJoA7H

A couple of photos sent in by Tony Daly of Dublin’s strike event.

Update from Tony Daly in Dublin

We are facing the greatest existential crisis humanity has ever faced. And yet it is being ignored. You who have ignored it know who you are.

Now the entire crowd is singing Imagine. Who said the youth didn’t have a voice? #SchoolStrike pic.twitter.com/6ugKdUVHot

This is right where it all began. Here, on 20 August 2018, Greta started her #schoolstrike in front of the Swedish parliament.

Nine months later: the birth of a global movement!

A damp day in Munich, but great to see the commitment from students there despite the weather

The students are calling on the Government to declare a “climate emergency” and have issued a list of six demands to lawmakers.

The demands, which were based on a survey sent to students across the country, include:

So, why exactly are so many students taking to the streets today? Second Year Student Molly Mercier-Richmond, from North Wicklow Educate Together says:

the protests are aimed at waking people up to the true gravity of the situation facing the world. I don’t think everybody fully understands how important it really is; that we really need to take action. A lot of people say there are 11 years left until the tipping point where there is no return. I think when you think of it like that, it really does strike you that you have to do something now.

And updates from the People’s Republic:

Well done to all at #schoolstrike4climate! #Cork #FridaysForFuture #climatestrike pic.twitter.com/OHM9XPtUSt

How many students in Cork do you reckon? #ClimateStrike #FridaysforFuture #SchoolStrike4Climate pic.twitter.com/CJ4ivg1iuL

Some updates from Dublin:

A massive crowd, already, at the Dublin #FridaysForFuture #schoolstrike4climate. pic.twitter.com/AuIkuSzQlg

Climate activists @ the dart station on the way to Dublin city centre. Striking independently of school. And so it begins…#FridaysForFuture #schoolstrike4climate #ClimateStrike pic.twitter.com/dzNmmtsd5x

Bus is filling up with students on their way to #ClimateStrike. Truly in awe of this generation #schoolstrike4climate #climatechange #dublin #ireland pic.twitter.com/JmxZbBxrZ3

Looking at all of the posts on social media and mainstream media, there is incredible momentum building. There are hundreds of thousands of students out today, using their voice, speaking from the heart and it is SO powerful.

Its still not to late to join a protest that may be near you, check out the Schools Climate Action Network site for locations, or with your local schools

Sri Lankan students planting trees in solidarity with those striking around the world and asking ‘What is the government doing?’

A post shared by Living Heritage Koslanda (@livingheritagekoslanda) on Mar 15, 2019 at 4:38am PDT

Last night’s update from the incredible young woman who started it all, Greta Thunberg, who has now been nominated for the Nobel Peace Prize

Latest update say: 2052 places in 123 countries on all continents, including Antarctica. So, the question is: What will you do on March 15 2019? #schoolstrike4climate #FridaysForFuture #climatestrike #WhateverItTakes (picture from Sydney today)

Just to give an idea of the scale of events today, here is the world view on how many protests are happening from Fridays For Future 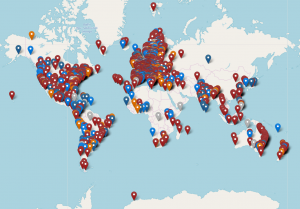 Looking like 50,000 people here on #climatestrike here in Melbourne. This is the student revolution, all you haters and politicians better watch out. #schoolstrike4climate

Good morning and welcome to our live blog on today’s climate strikes here in Ireland and around the world where many have already begun from Hong Kong to Australia, South Africa to France. Please do send on any information and images which you would like to have featured to ciara@developmenteducation.ie.

And to all the young people marching – you are an inspiration!