What has changed since World Food Day 2018? 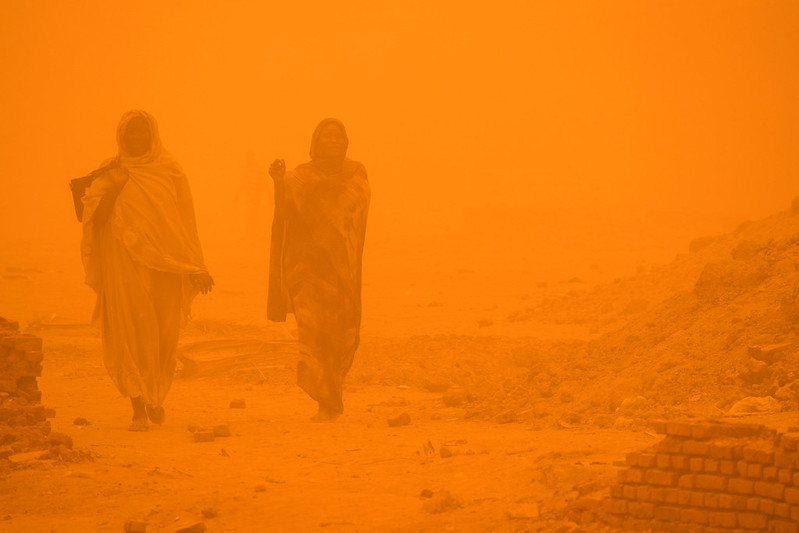 The official theme designated by the UN for World Food Day 2019 focuses on a healthy and sustainable diet, and for an holistic approach to action, Our Actions are Our Future: Healthy diets for a #zerohunger world:

“Achieving Zero Hunger is not only about addressing hunger…but also nourishing people, while nurturing the planet. This year, World Food Day calls for action across sectors to make healthy and sustainable diets affordable and accessible to everyone. At the same time, it calls on everyone to start thinking about what we eat”.

Last year, the state of the food crisis in Yemen was described by the UN as ‘the worst famine in the world in 100 years’.  In 2019, Yemen is still the worst humanitarian crisis in the world.

The 2019 Global Report on Food Crises report, Prepared collectively by 12 leading global and regional institutions under the umbrella of the Food Security Information Network, highlights the plight of millions of people who must fight every day against acute hunger and malnutrition.

The worst food crises in order of severity in 2018, were:

The figure of 113 million people represents a slight improvement over the number for 2017 presented in the Global Report on Food Crisis (2018) in which an estimated 124 million people in 51 countries faced acute hunger.

Despite the slight decrease over the past three years, the report has consistently shown that, year on year, more than 100 million people (2016, 2017 and 2018) have faced periods of acute hunger. The modest decrease between 2017 and 2018 is largely attributed to changes in climate shocks.

More than 20 million Yemenis are food insecure, with nearly 10 million people on the brink of famine and starvation. Two-thirds of all districts in the country are already ‘pre-famine’. A first-ever assessment in the country confirmed that 65 000 people are in advanced stages of hunger and extreme food deprivation. In addition, there are 238 000 people in ‘IPC Phase 5’ (Integrated Food Security Phase Classification of which 5 is the most acute: Famine/Humanitarian Catastrophe) who will face similar conditions if food assistance is slightly disturbed. 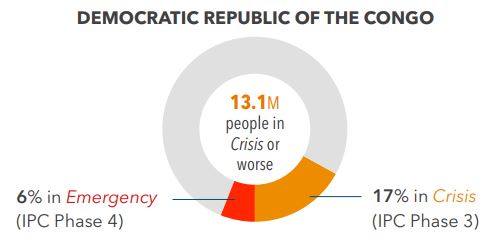 DRC is now the second largest hunger crisis in the world after Yemen. It is the second largest country in Africa, ranking 5th of 178 countries on the 2019 Fragile States Index, placing it in the highest category of risk (“very high alert”).

Over half of the country’s population lives below the poverty line, with food insecurity on the rise, largely due to conflict and insecurity. 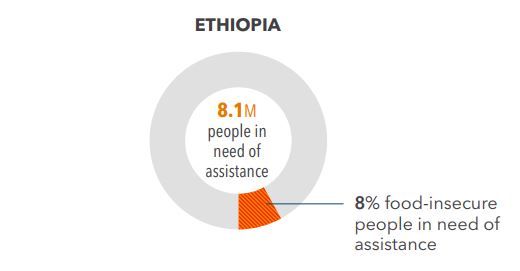 Ethiopia is experiencing its second severe drought in less than two years. Insufficient rainfall during the 2017 rainy season has led to severe water shortages, catastrophic livestock losses, and failed crops throughout the country. 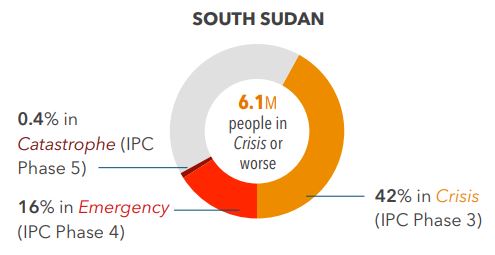 South Sudan is in the midst of a catastrophic humanitarian crisis driven by over four years of  civil war. Harvests in late 2017 were poor or non-existent for many. Trade and local markets have been disrupted and food stock has depleted. Over 7.1 million people – half the country’s population – are facing extreme and deadly hunger. Hunger and malnutrition levels are at historic high levels. As at January 2019, some 7.1 million people were in need of humanitarian assistance. Some 6.3 million or 54 percent of South Sudan’s entire population do not know where their next meal will come from as hunger peaks during the lean season from May to July.

From the beginning of the conflict in 2011, the number of people in need of humanitarian assistance has risen to 11.7 million people.

Of these, 6.5 million people are acutely food insecure, while an additional four million are at risk of slipping into food insecurity if not assisted adequately.

Chronic food insecurity in Sudan threatens lives, livelihoods and stability. Due to prolonged conflict, environmental deterioration and other disasters such as drought and floods, many of Sudan’s people are at risk of food insecurity. 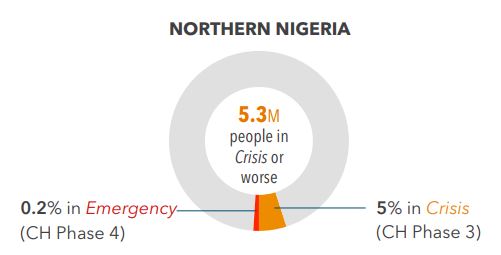 Nigeria is the 10th largest producer of crude oil in the world and achieved lower-middle-income status in 2014. However, conflict in its Northeast region has displaced 1.92 million people and left another 7.7 million in need of humanitarian assistance.

This post was prepared as part of the World Food Day 2019 series brought to you by the Professional Development Support Service for Teachers (PDST), Concern Worldwide, Self Help Africa and developmenteducation.ie