The report finds that, as a group, the EU is failing to address global tax dodging and shows Ireland scoring poorly in key areas. This includes the Irish government’s failure to introduce a centralised public register of the real owners of companies and trusts, a key measure to combat financial secrecy on a global scale. 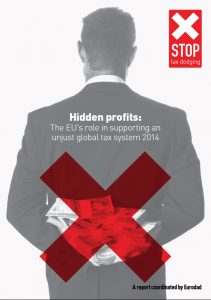 19 civil society organisations across Europe have examined their national governments’ commitments and actions towards combatting tax dodging, ensuring transparency and their attitude towards letting the poorest countries get a seat at the table when global tax standards are negotiated.

For the first time, in this report, each country is directly compared with its fellow EU member states on four critical issues:

1. the fairness of their tax treaties with developing countries;
2. their willingness to put an end to anonymous shell companies and trusts;
3. their support for increasing the transparency of economic activities and tax payments of transnational companies
4. their attitude towards letting the poorest countries get a seat at the table when global tax standards are negotiated.

As well as failing to set up a public register of the beneficial owners of companies and trusts, Hidden Profits shows that Ireland has not moved forward with requiring country-by-country financial reporting for multinational corporations.

A direct comparison of the 15 countries finds that:

This report was coordinated by Eurodad with contributions from civil society organisations in 15 countries across Europe including:

A special acknowledgement goes to Doctoral Researcher Martin Hearson of the London School of Economics and Political Science (LSE) for providing data and valuable input on the sections related to tax treaties.

Each country chapter was written by – and is the responsibility of – the nationally-based partners in the project, and does not reflect the views of the rest of the project partners.

Note: This report – the second in a series of three annual reports – brings together civil society organisations (CSOs) in 15 countries across the EU.

For more visit the Debt and Development Coalition press release and the DDCI website https://www.debtireland.org