Life Stories is an educational activity pack that gives a voice to young people from a diverse range of minority groups in Ireland. The young people’s stories form the basis of the pack. These stories are supported by group work, simulation games, drama and art activities, which enable young people to explore identity in Ireland and around the world. 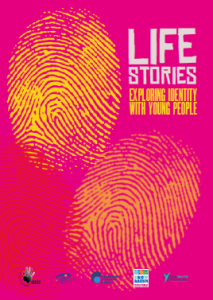 In Life Stories, identity is explored in the context of the individual characteristics, beliefs and interests of young people and in terms of the groups to which they belong. The stories and activities in this pack highlight that identity is not fixed and that people’s identities may change according to their needs at a particular moment.

A number of actions are suggested for young people to raise awareness – among their peers, families, organisations, the wider public and key decision makers – of the important role that perceptions of identity can play in limiting or enhancing the choices of young people in Ireland and globally. Guidelines are suggested for youth work practitioners to support their work with young people from minority groups, either within existing youth work provision or as part of a dedicated programme.

Big Ideas in this Resource