Erasure and the World Cup

The balls for this year’s FIFA World Cup were made by predominately female workers earning €122 a month in the Forward Sport factory in East Pakistan.

These women are Ronaldonianly, Messiesquely good at what they do. Their factory got the FIFA contract at very short notice after a Chinese supplier fell through: the women had one month instead of the usual six to produce world-class work. They succeeded.

This erasure is an offshoot of the greater World Cup paradox.

On the one hand, we call it a ‘World’ event (as one half of an eminently empowering binary in which the other side is a ‘Women’s World Cup’; the female gender needs announcement, while the male gender is natural and implicit). On the other hand, women exist only at the periphery, while the Brazilian government have quashed dissent with tear gas and terrorised the local population to keep the streets clean for tourists.

The elision of these voices and experiences has a common justification: to keep the game ‘fun’. If you want to celebrate female achievement, go and watch the Women’s World Cup. If you want to rail against the Brazilian government, take to the streets (tear gas notwithstanding). But the beautiful, male, able-bodied game must remain untainted by these intrusions.

We should not be able to uncritically enjoy a game that has played a direct role in making favela life more terrifying for Brazilians by bringing in Pacifying Police Units who use excessive force on civilians but whose presence keeps FIFA happy. If we know that Ronaldo will be playing in a fraction of the matches, we should know who stitched all the balls for all the matches – and their salary should attract as much public interest as Ronaldo’s does, too.

That isn’t to say that these events and people haven’t been reported on. They’re out there in the journalistic ether if you look for them, as is the Women’s World Cup. But it is possible to watch televised coverage of the men’s World Cup without being made much aware of female involvement in sport or of repression and drug crime in its host city. Through concerted violent effort on the part of the Brazilian government, it’s even possible to attend without having your experience spoiled by the strife that many citizens can’t escape from.

A more subtle version of this erasure can be seen in attitudes to the women shown on-screen. On Twitter, some praise Brazilian broadcasting for its choice of women to show in reaction shots, while others view it as a distraction from the football. The import of these women’s appearance is uncontested turf; the only dispute is over whether or not they take away too much attention from the serious business of football. 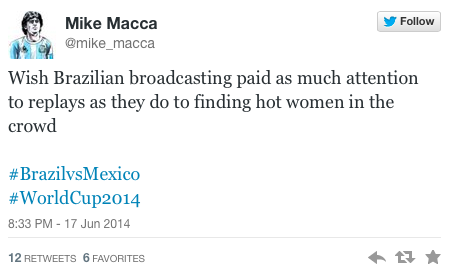 While the harms of objectification are well-established, concerns over using women as window-dressing seem to mislocate the root problem. When men get the bulk of the screentime and enjoy the automatic label of ‘best in the world’ for beating other men, women are already implicitly degraded. Already, a form of football claiming to be the ‘best’ without factoring in female contributions has relegated women to subordinate, subsidiary roles. Showing women in those roles is just the next step.

Overtly instantiated misogyny is uglier and feels more pressing than implicit misogyny – and perhaps more pertinently, addressing the latter requires more effort. Criticising is easier than finding and valorising women’s stories. Tellingly, Jezebel decried sexist World Cup merchandise but did not report on the Pakistani women who stitched the footballs.

Lean In-esque assimilationism also dominates feminist World Cup coverage, as evidenced when Sue Bridgewater argues in the Guardian that demeaning portrayals of women are wrong because ‘women like football too’. Actually, demeaning portrayals of women are wrong because they portray women in a demeaning manner. If those portrayals are connected to the World Cup, it seems only reasonable that some women might be put off the competition; their criticisms are hardly blunted on that basis. Many women do like men’s football – but they should not have to earn basic respect by professing their enjoyment of a game that often goes hand-in-hand with their own objectification. (That’s not to say that women shouldn’t talk about things they like – only that this, on its own, probably won’t be smashing any patriarchies in the near future.)

To round off with a personal resolution: I will watch the next Women’s World Cup and hope everyone else does. The Pakistani football-makers, too, deserve celebration – and most pressingly of all, the Brazilian protesters deserved better than to have their aspirations quashed so that football fans wouldn’t be put out.

This article originally featured in Trinity News on 18 June 2014 and has been crossposted with permission | More info at https://trinitynews.ie