Climate change and climate justice are often seen as abstract concepts that are hard to get to grips with, especially for young people.

The key to engaging this age group with these ideas is to approach them through active and experiential learning, which is why the Development Education team at Trócaire decided to run a Climate Change Challenge Weekend last November on the campus of Maynooth University. 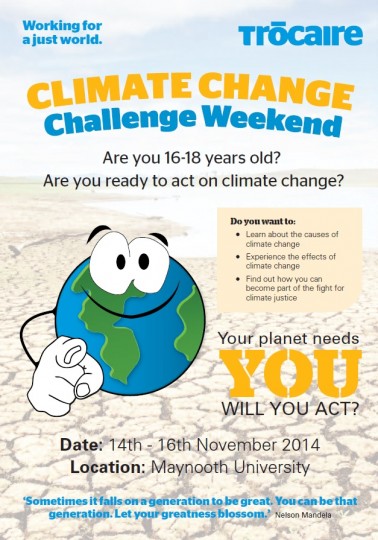 The aims of our weekend event were simple enough:

Our plan was to give the young people a chance to work with Trócaire staff from a variety of fields; a visitor from one of our partners overseas; Trócaire volunteers; and other agencies who joined us at different times over the weekend. We hoped that the participants would be able to look at some of the causes of climate change, experience some of the effects, and most importantly, look at how they can become an effective part of the solution.

On Friday the young people were brought on an eco-tour of Maynooth University campus by Feidhlim from Eco-Unesco which looked at how the campus has grown, consuming more land and resources in the process.

This was followed by a workshop on the sustainable use of tropical hardwood delivered by Tom Roche from Just Forests. Both sessions explored some of the causes of climate change, which the participants were then able to voice their opinions about through dance and drama with the help of the Barefeet Theatre Company, an amazingly energetic and inventive way to put across a point of view.

On Saturday it was time to experience some of the effects of climate change.

After breakfast, the participants watched a broadcast by President Grant, the leader of our fictional country of Aslae, which was experiencing severe flooding exacerbated by climate change.

With the help of staff from Trócaire and the Red Cross, the young people had to evacuate the campus and head to the border, where they would find safe haven in a joint Trócaire/Red Cross refugee camp. The border crossing into the neighbouring country of Troland proved difficult for many of the ‘families’ of refugees, who either had no passport (or money to bribe the border guards!), or were deemed too dodgy looking to enter. The local people smugglers thrived in this situation, escorting many people into the camp through an unofficial and expensive secret crossing.

Those who were able to reach the camp by whatever route they took were then subjected to life in a refugee camp, complete with tired and tetchy camp staff, invasive foreign media, and a visitor from the UN who came to inspect conditions at the camp before leaving to head back to her very much safer and more comfortable life at UN headquarters in New York (the Cafeteria at Maynooth!) to deliver her report. Life on the camp proved hungry, boring and cold for the climate change refugees, and it didn’t take long before the young people came to appreciate how horrible an experience this can be.

The refugee simulation came to an end when the Troland border guards arrived to close the camp due to a suspected outbreak of disease, and the climate change refugees found themselves being moved on.

Needless to say, all the participants were glad that the experience was over, but afterwards it was clear that they understood how this can happen to anyone in any part of the world, and that the likelihood is increasing due to the lack of effective action against climate change.

In the evening time, Rosie Murray and Hilary Daly from Trócaire delivered two workshops which really hit home to the young people how climate change is a justice issue, because it affects the poorest people around the world the most. Through this experience the young people understood the scale and urgency of the problem, and they began to ask questions about what action they could take.

Some potential answers to this question came on Sunday, when Orla Quinn from Trócaire Campaigns team and Tania Guillén, our visitor from Nicaragua delivered a number of activities which explored different aspects of activism. The hope was that, after their experiences over the weekend, the young people would be ready to move from a passive response to climate change, to a more active response.

Through Orla’s activist toolkit, and the mock UN climate Summit designed and delivered by Orla and Tania, participants were introduced to a variety of ways in which they can take meaningful action to ensure that our government listen to the views of young people on climate change.

Through active and experiential learning, the Development Education team at Trócaire, with a lot of help from our friends, were able to teach the participants not just about the causes and effects of climate change, but also show them that they can become part of the solution through activism.

The weekend is over. What next?

Since the event last November, many of the young people have started on their activist journey by taking part in photo stunts, protests, and lobbying MPs and TDs with the help of the Trócaire campaigns team.

Throughout the rest of 2015, in the build up to COP 21 in Paris, the young people will be involved in a variety of events that will enable them to continue their activism. Hopefully this will demonstrate that young people do have a voice, and given the appropriate encouragement and opportunities, they can become an integral part of the worldwide campaign for climate justice.

Trócaire hopes to run another Climate Change Challenge Weekend in the autumn term in 2015, check the Trócaire website for more information about this, and other upcoming events!

For more information on activism, check out the Trócaire activist toolkit.

For a variety of resources on climate change and a range of other social justice issues, check out the resources section of the Trócaire website.