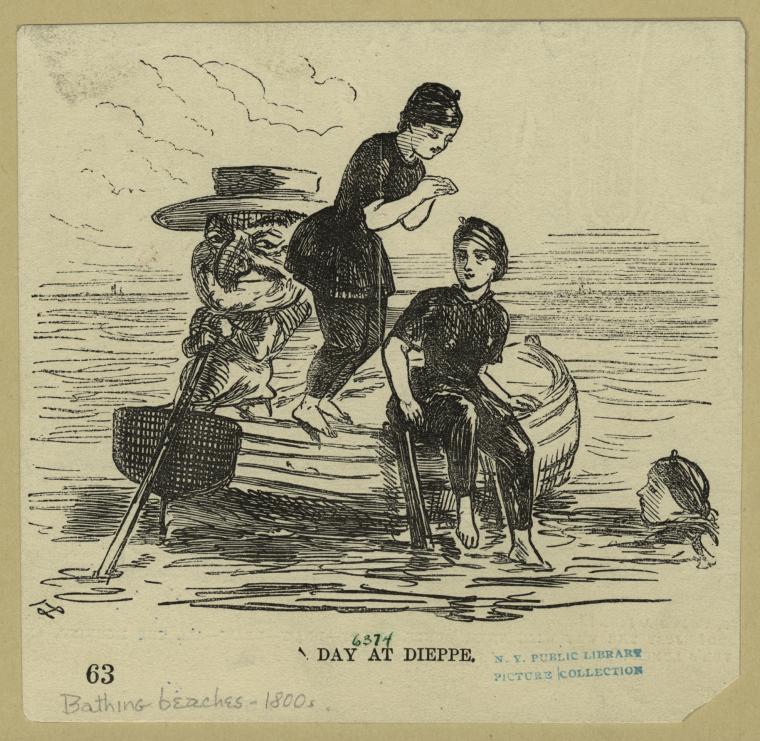 Just imagine you’re sat relaxing in the sun during the summer. You have a swim in the beautiful waters of the French Riviera. Along come 4 male police officers who inform you that you are breaking the law, must uncover yourself, pay a fine and/or leave the beach.

One image taken on the Promenade des Anglais beach in Nice, France, depicts this exact scene. A woman sunbathing alone on the beach is asked by policemen to remove what is was described by the Daily Mail as a “Muslim-style garment to protect her modesty”– a blue headscarf with matching cotton long-sleeved shirt-dress/tunic.

There is something incredibly intrusive about armed police entering a beach and publicly demanding a female sunbather that she must take off  her clothes, pay a fine and/or leave the beach – because she is underexposed – all in the name of security.  This isn’t an isolated case. Other women have been banned and fined from beaches in France for covering various parts of their bodies deemed unnecessary by the state (Villeneuve-Loubet near Nice, Sisco in Corsica where ‘armed’ police were filmed waiting for women to come out of the water to present them with a fine, ask them to leave or to remove their coverings, Le Touquet are also considering passing a similar ban).

To give some context, these actions by police in France come as a direct result of some of the most horrific violence which have been claimed as ‘acts of terror’ by what is popularly referred to as the ‘Islamic State.’  Within this setting the French government has been under increasing pressure to respond to the country’s state of emergency – and the financial impact of the blow to tourism.  One response was to target women on beaches who appear, as deemed by the authorities, to be overdressed for the environment which in some way represents their association with extremism (rather than religion).

As such, the ‘burkini’ has become the target of the security forces. A Burkini (burqa and bikini!) is, “a three-piece swimming costume, often made out of polyester, which covers the entire body but leaves the face, hands and feet exposed” and most commonly used by Muslim (and increasingly other) women on beaches.

It was developed in 2004 by Australian-Lebanese designer Aheda Zanetti after realising a gap in the market for appropriate sportswear (not specifically for swimming) for Muslim women and girls. The burkini is developed in line with the Islamic code of dress, but is not only purchased and worn by Muslim women, which has encouraged Zanetti to design a burkini without a headpiece for the more ‘secular’ among us.

In August the Mayor of Cannes, David Lisnard made the wearing of a Burkini illegal attire on the beach ‘for the summer.’ He viewed it as a ‘uniform’ a ‘symbol of Islamist extremism.’ The administrative court ruled that the beaches were inaccessible to those that did “not have [swimwear] which respects the good customs and secularism” which he claimed is grounded in the French republic. The burkini ban outlawed…

“beachwear ostentatiously showing a religious affiliation while France and places of religious significance are the target of terror attacks, is liable to create risks of disrupting public order (crowds, scuffles etc.) which it is necessary to prevent.”

This was clarified by Thierry Migoule, head of municipal services for the town who explained that: “We are not talking about banning the wearing of religious symbols on the beach … but ostentatious clothing which refers to an allegiance to terrorist movements which are at war with us.”

The ruling judge further included that

“the wearing of distinctive clothing, other than that usually worn for swimming, can indeed only be interpreted in this context as a straightforward symbol of religiosity.”

The French Prime Minister Manuel Valls added a gender dimension claiming that the burkini symbolised “an archaic vision of a woman’s position in society” that was incompatible with ‘French values.’ As of Friday last week, however, France’s highest administrative court, the Council of State, viewed legislating a burkini ban as ‘unconstitutional‘.

The overwhelming debate surrounding the burkini has primarily focused on terrorism and allegiance to radical Islam and separatism which is viewed by some as a direct challenge to ‘French values’ of secularism, national unity and for others the ‘enslavement of women’ in a society where women are ‘free.’

While the burkini was banned in public swimming pools in France, where it was deemed unhygienic, it is only recently that this ban was extended elsewhere, viewed as a ‘threat to public order’ and a symbol of terror. Previously in 2010, women were targeted once again for their ‘covering’ and were banned from wearing the full veil (burqa or niqab) in public.

Within the social media ‘debate’ (commentary or opinion?) I am left wondering why, once again, women are at the forefront and penalised for our fears and uncertainties?

I fail to understand how criminalising women lying on the beach or swimming with their families with limited body parts exposed somehow make us feel safer? In what ways does the power of the police to force a woman to ‘uncover’ and humiliate herself in public somehow make her feel more empowered? In what ways does being fully covered compared to barely covered impact on the compatibility with a secular society? In what ways are women’s rights protected and enforced in this scenario? How exactly, does a woman who is covered from the exposure of the sun, lying on a beach or swimming in the ocean somehow represent being ‘enslaved’?

Surely the burkini should be viewed as a first step to women’s empowerment. Muslim women in particular are now able to access places they never considered open to them before this. They can lie on a beach, swim in the ocean, be with their children in the water as they swim, as compared to watching from the water’s edge. She can play sport as seen in volleyball at the 2016 Olympics and running. She can walk/swim alongside her husband. The burkini offers women a public space traditionally denied to her.

As the designer of the burkini explained:

“it was my first time swimming in public and it was absolutely beautiful. I remember the feeling so clearly. I felt freedom, I felt empowerment, I felt like I owned the pool. I walked to the end of that pool with my shoulders back.”