The topics of climate change and human migration attract considerable public and media attention. Together, they represent a potentially explosive combination. Attempts to communicate about climate change and migration risk inflaming two already heated debates. However, the language is not yet entrenched. A major opportunity exists to shape how the debate develops.

This briefing explains the basic principles of good communication on the issues. It is intended for use across the refugee, environmental, human rights and development sectors. 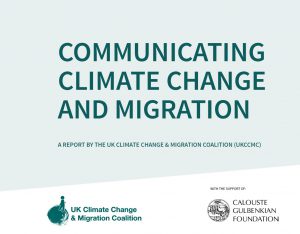 Inevitably with such a complex problem, different sectors have approached the issue from different angles. Within the UK Climate Change & Migration Coalition (UKCCMC), different terms, language and narratives are promoted by organisations with different perspectives on the problem. Merging these two already contentious subjects is an unenviable communications challenge.

Whether through confusion and misunderstanding about technical terms, or through the adoption of language and approaches that do not ‘map over’ well to a different audience, there is a significant danger that campaigns on climate change and migration could backfire.

The risk is that without a pro-active approach, climate change and migration will become yet another polarised debate, dominated by those whose political interests conflict with protecting human rights in developing countries and taking meaningful action on climate change.”