This report provides an overview of the sources of finance available to developing countries and proposes recommendations on how to mobilise further resources. It also explores how to mobilise resources to finance the provision of global public goods: for example, to combat climate change, promote peace and security, and create a fair and equal trading system.

The report is the second in a trilogy (2013-15) focusing on “Global Development Co-operation Post-2015: Managing Interdependence”. 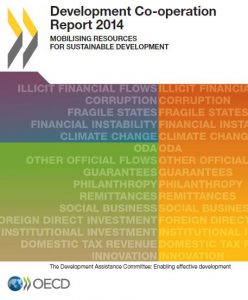 Contrary to popular belief, even in the midst of this global financial crisis, Overseas Development Assistance (ODA) levels now stand at an all-time high of $135 billion (2013). The key point of this report is that that the context of global poverty is changing dramatically, and a new and innovative approach to finance for development is required.

1 billion of those living in extreme poverty are now living in Middle Income countries. Until recently, ODA has been the main source of funding for development, but the trend is towards declining ODA levels to Least Developed Countries. The report notes the rapidly shifting landscape of Foreign Direct Investment (FDI), with Southern providers, and South-South funding arrangements, becoming increasingly important. South-South foreign direct investment is growing at an annual average rate of 21%, and South-South trade grew as a share of world trade from 8% in 1980 to 27% in 2010, even while North-South trade was falling.

Today, approximately 30% of outward FDI is from developing countries, and China is now the 5th largest investor, accounting 20% of all FDI in developing countries. Turkey’s recent ODA programme recently increased by 30%, while Arab nations, Brazil and Mexico develop ambitious development programmes with their neighbours and beyond.

The report includes a number of opinion pieces by experts in their field and identifies a range of options for development funding, beyond the traditional ODA model, including:

For all of this ‘innovation’, the report sees an ongoing and vital role for ODA, particularly (though by no means exclusively) for Least Developed Countries and Fragile States, and argues for a rethinking of the allocation of resources, in favour of these countries. It also calls for:

An increased emphasis on the private sector can be discerned. “Ireland’s policy for international development One World, One Future acknowledges that…it increasingly promotes private sector development in its key partner countries by placing a greater focus on an enabling environment for investment and trade, tourism and people-to-people links (Government of Ireland, 2013).”

The report notes that,

“in 2013, Ireland issued a new International Tax Strategy and Charter that places a strong emphasis on tackling international tax evasion and avoidance…Ireland is placing a greater emphasis on supporting partner countries to raise domestic revenues.”

This is worth considering in the light of the debate on Ireland’s contradictory role as a facilitator of corporate tax avoidance. Beyond Ireland, OECD proposals on Corporate tax have been criticised by Oxfam and others in The Independent Commission for the Reform of International Corporate Taxation for their lack of transparency, and failure to address the needs of developing countries.

In relation to the report’s recommendations on support for fragile states, Irish support is increasing and reached USD 227 million in 2012 (42% of total bilateral ODA). In 2012, 62% of bilateral ODA ($335 million) was allocated to least developed countries (LDCs). The share has slightly fallen since 2010, when it stood at 65%, but still Ireland ranked highest among DAC members for the share of bilateral ODA allocated to LDCs in 2012.

Editorial: More and better financing for development, by Erik Solheim

Chapter 1. How to better mobilise resources for sustainable development

A broader development agenda will require broader finance: where will the financing for the global Sustainable Development Goals come from?

There are large differences in developing countries’ needs and access to finance. While the relative importance of ODA is diminishing, this is not the case everywhere, as LDCs remain the most dependent on ODA and Middle-income countries still face many development challenges. ODA growth is slowing in those countries that need it most and it may be time to rethink the allocation of ODA, with a proposal that, “Half of all ODA should go to the least developed countries”.

Chapter 4. The growing development potential of other official flows

International financial institutions are by far the largest providers of other official flows .

Chapter 6. Are institutional investors the answer for long-term development financing?

Chapter 7. Tax revenues as a motor for sustainable development

Chapter 9. The changing role of NGOs and civil society in financing sustainable development

Estimates of how much NGOs mobilise directly from the public differ. New business models are needed for the new global goals in the wake of new modes of donating.

Chapter 10. What place for remittances in the post-2015 framework?

Remittances make up a large share of developing countries’ GDP and are on the rise, but their full scale is difficult to calculate.

Opinion pieces: “ODA should be used to enhance risk sharing between the private and public sectors” “Returns for success are the best means of stimulating private investment.”

Chapter 12. Creating an environment for investment and sustainable development.

Regulations and good legal capacity can encourage investors. Good laws, and the capacity to enforce them, are fundamental.

Many OECD countries are susceptible to money laundering. Progress on fighting foreign bribery is mixed and greater political will is needed for recovering illicit assets.

Chapter 14. Supporting countries in growing their tax base

Chapter 16. Enhancing the contribution of social business to sustainable development

Social entrepreneurship is widespread and varied in developing countries and has some advantages over conventional development co-operation, but is not risk free.

Development finance post-2015 and the provision of global goods

Well-financed climate change action must be central to the post-2015 goals. Careful management will be needed to make the most of environment and development synergies.

Financing peace and security is a political challenge and we need better data to support that work.

Prevention is better than cure: funding global diplomacy and justice is a must.

Least developed fragile states depend heavily on development co-operation, though remittances are also an important resource for fragile states. While foreign direct investment in fragile states is volatile, raising domestic revenue offers both potential and challenges.

The nature of world trade is changing and there are still impediments to equitable world trade.

Trends and profiles of other providers’ development co-operation

Spanish, French and German translations of the summary document are also available from the OECD iLibrary.