Erratum to the Shell Annual Report 2010

During the Shell annual general assembly (AGM) in The Hague in May 2011, Friends of the Earth International presented a spoof “erratum” (otherwise known as a statement of an error and its correction inserted) to the annual report where Shell apologises for worldwide damage, which was distributed among shareholders and senior management.

Presented as a fake apology by the company, it displays 12 climate, sustainability and other environmental case studies from 5 continents on the impacts of Shell’s oil and gas operations and the involvement of Shell in the violation of human rights and labour irregularities. 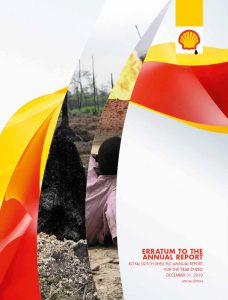 The authors have presented and interrogated a range of unsustainable practices used by the company and to challenge its performance, shadowing the layout in the annual Shell Sustainability Report (more info on that below). The report includes:

The erratum serves as a “wake-up call” for Shell’s shareholders and board of management and is backed up by a longer in-depth report titled Royal Dutch Shell and its sustainability troubles (2011) featuring the 12 case studies used in the Erratum shadow report involving life threatening pollution, bribery, slavery and the company’s violation of national and international laws.

The Erratum was produced by FOEI within this context so as to challenge the evidence and outlook of how Shell understands ‘sustainability’ in principle and in practice.