Global Hunger Index 2019: The challenge of hunger and climate change

This is the fourteenth annual publication of the Global Hunger Index (GHI), a report jointly published by Concern Worldwide and Welthungerhilfe. The Global Hunger Index (GHI) is a tool designed to comprehensively measure and track hunger at global, regional, and national levels. GHI scores are calculated each year to assess progress and setbacks in combating hunger. The GHI is designed to raise awareness and understanding of the struggle against hunger, provide a way to compare levels of hunger between countries and regions, and call attention to those areas of the world where hunger levels are highest and where the need for additional efforts to eliminate hunger is greatest. 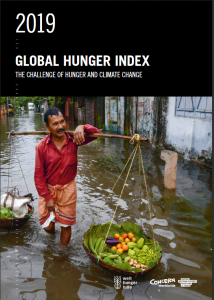 The 2019 GHI measures hunger in 117 countries where the assessment is most relevant and where data on all four component indicators are available.

4 countries Chad, Madagascar, Yemen, and Zambia suffer from hunger levels that are alarming and 1 country Central African Republic from a level that is extremely alarming

High-income countries are not included in the GHI but still show variable, non-negligible rates of food insecurity. The Food Insecurity Experience Scale—another measure of hunger not used in or directly comparable to the GHI—shows that in the European Union, 18 percent of households with children under age 15 experience moderate or severe food insecurity. The essay this year focuses on the impact of climate change and hunger.