An powerful movie about the Genocide in Rwanda in 1994. The film is based on real life events of the massacre during the genocide at the École Technique Officille, Kicukiro. 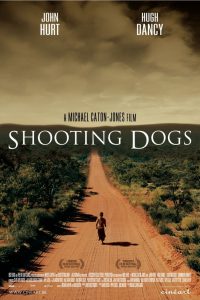 Set on location, using survivors of the massacre in minor acting roles and in behind the scenes movie production, the movie is based on the experiences of BBC news producer David Belton, who worked in Rwanda during the genocide. The story centres around the experiences of Roman Catholic priest, Father Christopher (played by John Hurt), and a school teacher, Joe Connor (played by Hugh Dancy). In documenting the events at ETO during the genocide, the movie also highlights the failure of the world, in particular the UN, to respond to the genocide at the time.

During the genocide, the school where the massacre took place, was run by the Salesian Fathers in Kicukiro, and was one of 14 bases for soldiers of the Belgian UN Assistance Mission for Rwanda (UNAMIR). At the height of the genocide, French troops arrived at ETO to evacuate three French and several Italian nationals. They left with 150 Europeans. The UN soldiers pulled out the next day and the militia (Interhamwe) who had been angrily waiting for the opportunity to massacre immediately storm their way into the compound to murder those sheltering at the ETO. Only a small number survived.

The UN soldiers at the ETO did not have the authority to shoot at the Hutu extremists involved in the massacre, hence the title of the movie. Shooting Dogs, refers to the reaction of the UN soldiers who would shoot at stray dogs that scavenged the dead bodies. Through some harrowing scenes, this symbolic message is captured, demonstrating the absurdity of the situation that the Rwandan people, the UN and all those involved were in.

In one of the scenes, a news reporter sits with the school teacher surrounded by dead and dying bodies, and comments about the dispassionate effect of the brutality in Rwanda on her as compared to the genocide in Bosnia – “Over here, they’re just dead Africans” – an effort of the movie to portray often Western attitudes towards the continent and the inaction.

See our section on Genocide for more information on the issue: https://www.developmenteducation.ie/issues-and-topics/genocide/

Use class activities under the Transition Year course on Strand 3: Conflict https://www.developmenteducation.ie/teachers-and-educators/transition-year/strand-3-Conflict/Activities.html

Note: this film was released in the US as ‘Beyond the Gates’.

Shooting Dogs is widely available on DVD for rent or to purchase. For example: