Menu
Home / Resources / The State of Food Security and Nutrition in the World 2019: safeguarding against economic slowdowns and downturns

The State of Food Security and Nutrition in the World 2019: safeguarding against economic slowdowns and downturns

The State of Food Security and Nutrition in the World is an annual flagship report jointly prepared by FAO, IFAD, UNICEF, WFP and WHO to inform on progress towards ending hunger, achieving food security and improving nutrition and to provide in-depth analysis on key challenges for achieving this goal in the context of the 2030 Agenda for Sustainable Development. The report targets a wide audience, including policy-makers, international organizations, academic institutions and the general public. 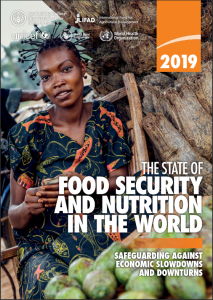 SOFI 2019 confirms a rise in world hunger for a third year in a row. There were 821 million chronically undernourished people in the world last year, up from 811 the previous year. One in nine people in the world now faces hunger. Africa is the region with the greatest prevalence of hunger in the world – the figure changes to one in five people hungry in Africa. Hunger is also on the rise in Western Asia.

The upward trend of world hunger – after decades of steady decline – yet again underscores the immense challenge of achieving the Zero Hunger target by 2030. The number of hungry people in the world is back up to where it was nearly a decade ago. The world is not currently on track to meet the goals of ending hunger and ensuring access to food for all.

Conflict and the climate crisis constitute the greatest drivers of hunger. This year’s report has a specific focus on economic downturn. Hunger has increased in many countries where the economy has slowed or contracted, mostly in middle-income countries. However, the greatest threat is where there is a combination of drivers – conflict, climate change and economic marginalization.

Download The State of Food Security and Nutrition in the World 2019: safeguarding against economic slowdowns and downturns PDF