Twenty Chickens for a Saddle

The memoir about growing up in Africa is a well beaten track, so why did Robyn Scott feel she had another one to add? “I wanted to tell a story about Africa not seen through the lens of a deeply troubled and traumatised country – as the continent’s memoirs disproportionately and sadly and inevitably are. And where the sheer challenge of trying to write a book propelled me to begin, what inspired me to keep going was growing realisation that in Botswana, here I had a way to tell a different story of Africa, through the prism of a happy childhood and a successful country, which told most of all the delights, beauty and eccentricities of the place.” 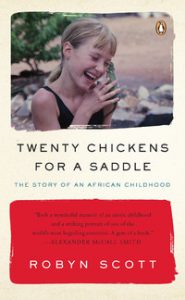 Robyn Scott  was six, and the eldest of three, when her parents moved from New Zealand to live in the former mining town of Selebi, into the converted cowshed opposite the home of their Grandpa Ivor, who had served as a pilot to Botswana’s first president Seretse Khama.

Scott’s family were quite mad with her mum, Linda’s near pathological optimistic outlook and her deep belief in alternative medicine, home-schooling, biodynamic farming – anything alternative. Her father, who was a flying doctor, and her grandparents were equally mad which makes the family very entertaining to read about. The kids were home-schooled until Robyn went to boarding school in Zimbabwe when she was fourteen. They were give great freedom and were free to explore the bush, leading to harrowing stories of poisonous snakes and the like. Later, when the family moved to a big farm on the South African border the stories had a darker backdrop due to the growing HIV and AIDS crisis and Robyn’s first awareness of racial tension. In 1995 her father started to inform his patients if he thought they had AIDS, which did not make him very popular. By the end of 1997 teachings on the epidemic became part of the syllabus in Botswana schools, but the initial lack of antiretroviral drugs left him fuming, which is why he eventually left the country.

Robyn Scott’s writing is fresh. She evokes Botswana’s beauty so well and her descriptions of the people living there are inviting. The history of the country is also nicely weaved into her story. She was only 26 when she wrote the book and many will argue what is the point in writing a memoir so young. But this is a happy childhood growing up in Africa and it’s good to read about an experience that was happy, as all too often it is a different story that is told.

Nearing the end of university while studying science, Robyn Scott decided to try her hand at journalism and landed an internship at the Financial Times. To get the job she penned an article about being home schooled in Botswana. Michael Holman, ex-Africa editor and author read it and declared that her story was a book waiting to be written and he encouraged her to do just that.

Robyn was home schooled until she was fourteen and her family lead a very simple life in Botswana, first in a deserted old mining town and then on a wild farm bordering South Africa.

Robyn now lives in London after going to university in New Zealand and later to Cambridge. She works as an independent business consultant, with her main focus health economics in the context of Africa. She helped to establish Mothers for All, a charity teaching income-generating skills to AIDS orphan caregivers in Botswana.