TY Students from Bray use art to investigate contemporary slavery 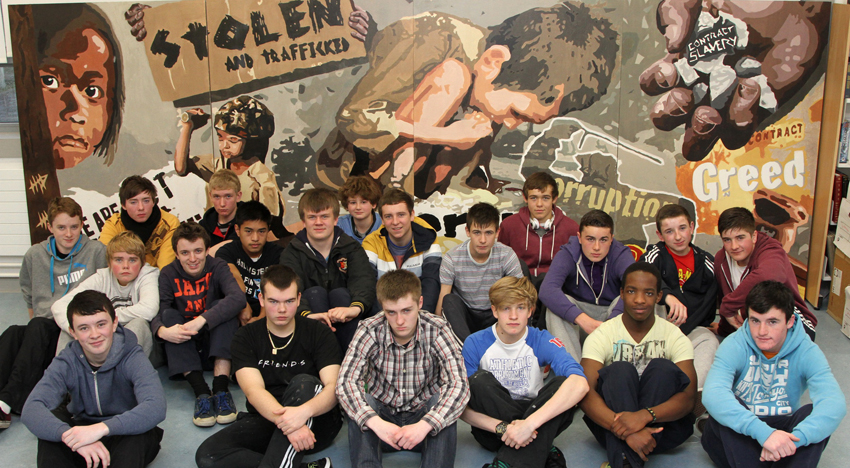 “We are Transition Year students from Presentation College, Bray and what we would like to share with you is real and happening now. We and our classmates were shocked and angry upon hearing these facts.”

*This blog was written by Patryk Labuzek, Andrew Dore and Conor Davenport as part of their contemporary slavery wall mural project 2012/13, with support from www.developmenteducation.ie

Currently, 27 million people are enslaved around the world.

Right now these 27 million people are being oppressed through trafficking, debt bondage, illegal contract labour and prostitution. They are starving so you can eat; exhausted so you can drive and dying so you can live as you currently do.

Slaves may have been involved in any number of the following: brick making, mining, quarrying, prostitution, gem working, jewellery making, cloth and carpet making, domestic service, clearing forests, making charcoal, working in shops, making fireworks, metal goods, harvesting sugar and other foods.  From Ireland, nestled in luxury as one of the top twenty richest countries in the world, we don’t usually see the wounds inflicted on others as a result of our actions. Maybe we just don’t want to see them.

Our world is now a global, interdependent community. What happens to a member of our global community in Africa, India, South-East Asia is as real and as serious as that which happens to our own neighbours. We fool ourselves into thinking that there are no slaves in the developed world, but we are blind. We are surrounded by slaves, even here in Ireland.

All one has to do is a simple Internet search to understand the magnitude of these horrendous violations of human rights.

Slavery: a thing of the past? [back to contents]

We dismiss slavery as a thing of the past. We live in a world where most information is available to us at the click of a button. Our world is a globalized and economically advanced community, yet slavery flourishes! Despite the ease of access to information, how many of us know this:

Why is slavery thriving? [back to contents]

Should we blame the slave masters, pimps, traffickers or the societies in which we live – the target market for slave trade profiting? If we don’t demand, they won’t supply.

Slavery is BIG business. In fact, it’s the third largest (or profitable!) criminal activity after illicit arms and drugs trading. The worldwide profits made from the exploitation of all trafficked labour is currently estimated to be US$ 31.6 billion every year. Of this, the UN Global Initiative to Fight Human Trafficking states that 49% (or US$ 15 billion) is generated in industrialized economies.

A 2003 study revealed that a single slave in the Netherlands earned her pimp over US$250,000 a year. Yet fines of less than US$2 are common for those convicted of slaveholding in India. In 1990, a Dinka boy in Sudan could be purchased for as little as US$15. 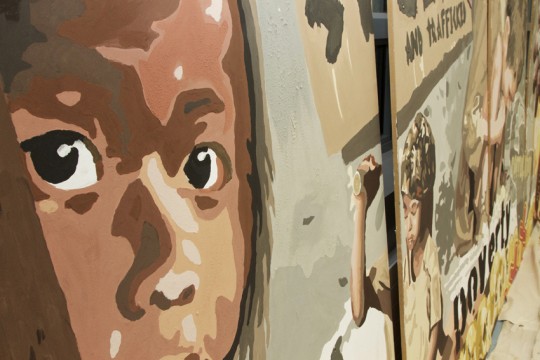 A bargain is a bargain, right?

There is a common thread emerging in our world today best characterized as a ferocious search for cheaper goods and services.

Consumers want cheaper products and businesses want to make more profit. This makes sense. But at what point does the cheapest product and the biggest profit affect human dignity? The “cheapest source” very well may involve the enslavement of human beings.

Perhaps the complex chain of production now associated with many common products lacks the transparency we need to make informed judgments about the integrity of these products vis-a-vis the impact on people’s human rights. Some of the common factors contributing to the global slave industry include poverty, educational opportunity, poor or lack of access to health care, gender discrimination, systemic corruption and racial inequality.

Types of slavery [back to contents]

Sex slaves and labour exploitation today [back to contents]

In the sex industry, human trafficking is often carried out in a form of contract labour.

Sexual exploitation is a form of slavery, in which individuals are coerced into sexual acts. Essentially, a person is treated like property, in which the person acting as having “right of ownership” exposes someone to rape or sexual abuse. The victim may be forced into sexual acts with the captor, with other people, or forced in to a position of servitude, marriage, or other activities involving a sexual component. When a person is sold to another for these purposes, it is called sex trafficking, which is a form of human trafficking (This definition is sourced from The Band Back Together Project).

Today, sexual exploitation is by far the most commonly identified form of human trafficking (79%) followed by forced labour (18%), whereas the large scale transatlantic slave trade, for example, was mainly for the purpose of forced labour. The victims of sexual exploitation are predominantly women and girls. Surprisingly, in 30% of the countries which provided information on the gender of traffickers, women make up the largest proportion of traffickers. In some parts of the world, women trafficking women is the norm.

This testimonial extract from a woman is a typical experience for many women forced into sex work, recalling how she was trafficked into the UK for this purpose:

Louisiana (26, Lithuanian) was a victim of human trafficking. She saw an advert for cleaning and waitressing jobs in the UK, and travelled to England with a man from the job agency. “I had my own passport. But when we arrived he took my passport away and told me I had to work as a prostitute. He said I owed him money for the travel and I would pay him back this way.”

Human trafficking doesn’t consist of sex slavery alone – almost a third of all human trafficking is used for labour exploitation, for example; in agriculture, catering and packing and processing. It could contribute to the food we eat and the packaging it comes in.

It is estimated that at any one time, there are as many as 2.5 million people in the world who are in forced labour (including sexual exploitation) as a result of being trafficked.

The mural [back to contents]

Nine point explanation of the mural:

What is to be done? Ending slavery in our lifetime [back to contents]

Slavery is a problem that we can all help to prevent in our day-to-day lives. Next time you go into a shop ask yourself, where does this come from? Why is this so cheap? Be sure to buy fair-trade products whenever possible. Find out first where products come from before and if they have been made through forced labour buying them.

Use the Products of Slavery mapping tool to stay informed.

We need to urgently raise awareness in all countries around the world so people can spot the signs of slavery and be able to report it to the authorities. The Blue Blindfold campaign in Ireland, run by the Department of Justice and Equality seeks to teach the public how to spot the signs for someone who has been trafficked, give details on Ireland’s response to prevent and combat people being trafficked (such as legislation in place, compare with the international response) and to provide key statistics on those areas.

Over 65 national and community organisations formed an alliance on ending prostitution and sex trafficking in Ireland in the Turn off the Red Light campaign. Take action to find out what your local representative and senators are doing to combat slavery in Ireland. An update on the progress of the campaign can be found here.

At the global level, the Free the Slaves movement believes that the United Nations Security Council should do four things to end slavery:

2. The Permanent Members of the Security Council should contribute funds and resources to the Special Representative to ensure that she or he can really attack slavery worldwide.

3. The Security Council should appoint a committee of experts to review the existing conventions on slavery and recommend how to unify and clarify these conventions, as well as coordinate and improve the UN’s programmatic response to slavery.

4. The Security Council should establish a commission to determine how the existing UN inspection mandate could be applied to slavery. When that commission comes back with a resolution to form an inspectorate for the slavery and human trafficking conventions, then there would, at long last, be teeth in the UN’s work on slavery.

Human rights are rights for everyone – not just privileges

Human rights principles are important, but only by facing up to the practices of human rights wrongs can we ever fully stop slavery. Ireland’s recent experience, with the government’s public apology last month to the 10,000 women and girls incarcerated in Catholic Church-run laundries where they were treated as virtual slaves, is testament to the power of people to set an antislavery agenda at home.

Paying the price to end slavery

How could you or I stop this injustice? Free The Slaves estimates that slavery all over the world could come to an end within 25 years at a cost of €25 billion – almost €57 billion was spent in 2009 on carbonated soft drinks in the USA alone.

It is our responsibility as compassionate members of our global community to make noise about these issues. By making noise we may be heard by those who have the power and capacity to make economic, legislative, political and ethical changes. Let us continue in the footsteps of slavery abolition campaigner William Wilberforce and finally finish what he and his many supporters began so many years ago.

The slavery mural project was delivered with the assistance of CSPE & Religion teacher Elaine Brennan and art teacher Clifton Rooney in Presentation College, Bray. Read Clifton’s blog on exploring modern slavery from a teacher’s perspective based on the mural project.

The TY students’ mural is currently touring Ireland in schools across the country to teach others about slavery and has featured in local press (Bray People news pickup) as well as the SpunOut.ie,  Immigrant Council of Ireland and The Irish Catholic. More images of the mural are available from the school website’s online gallery.

Background information [back to contents]