Syria: an appalling reality in 2016 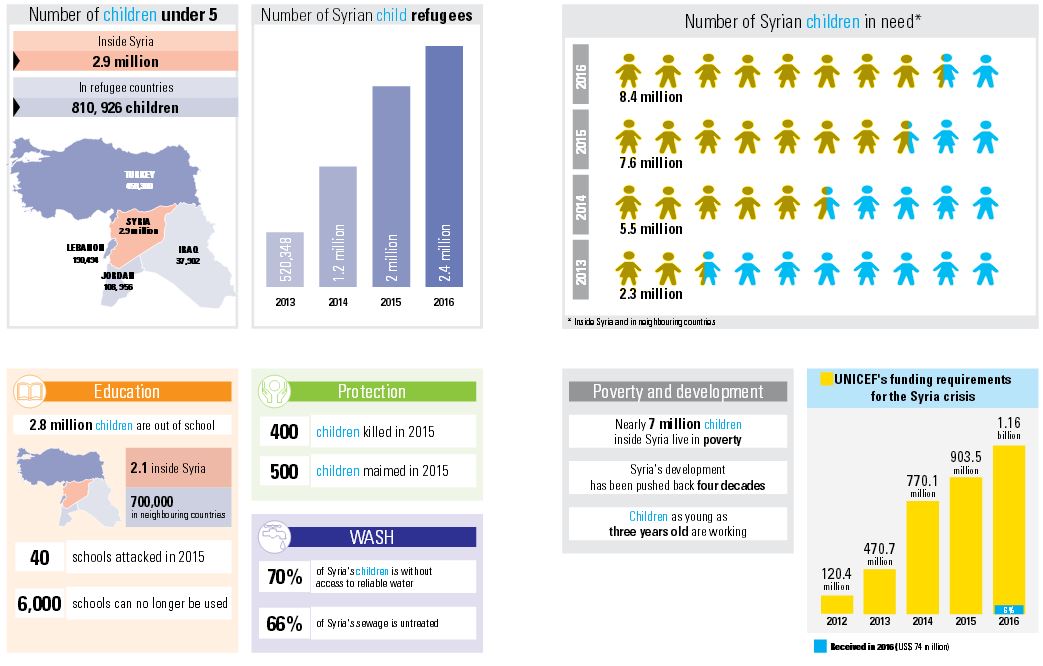 ‘The Syrian people wonder why the world is silent, and ask: ‘Why does the world punish us with its silence?  What did we do wrong to be forced to witness all of this murder and the destruction of our lives, homes and our dreams?’

Tuesday this week, March 15th, marked the 5th anniversary in one of the most shameful and depressing episodes of recent times – the conflict in Syria.  It’s as if the Cold War has come back with Russia and the US shadowboxing each other (and permitted or supported in doing so by their allies) while a largely innocent population pays the price.

Two recent briefings summarise much of the current situation, its background, consequences and hypocrisies; one, a brilliant but maddening report from Oxfam Fuelling the Fire: how the UN Security Council’s permanent members are undermining their own commitments on Syria (March 2016 and from which Aisha’s quote above is taken) and the second A UNICEF report No Place for Children: the impact of 5 years of war on Syria’s children and their childhoods (March 2016).

Two quotes, one from each report provide a tiny glimpse of the horrors of the conflict:

‘The pervasive violence and insecurity, indiscriminate attacks against civilians, denial of assistance and collapse of services is part of a deliberate strategy by parties to the conflict. However, they have been able to carry out such actions because members of the UNSC and ISSG failed to put sufficient pressure on their allies on the ground, and have either ignored or deliberately undermined their own statements  and commitments. Worse still, four of the permanent members of the UNSC have increasingly chosen to take a more direct military role in Syria, with varying degrees of direct consequences for the civilian population and escalation of the conflict.’  – Oxfam 2016:19

A Heavy Toll on Children:

… More than 10,000 children were killed between 2011 and 2013.  There is no verified data on the total number of children killed since then. No place is safe for children in Syria.  Violence has become commonplace, reaching family homes, playgrounds, schools, parks and places of worship.’ – UNICEF 2016:6

The UNICEF report catalogues the heavy human toll on Syria’s people, the damage done to the entire fabric of their society, the impact on families, homes, health, education and basic services but, most tellingly, it highlights the long-term implications especially for Syria’s youth.  The realities are captured in a summary graphic from the report:

Interestingly, the report also highlights the impact of the conflict on neighbouring states – the immediate region hosts eight times the number of Syrian refugees as Europe; One in every five people in Lebanon is Syrian, and one in seven in Jordan while Turkey hosts more than half of all Syrian refugees.

Ominously, the report quotes Dr. David Nott, a trauma surgeon who worked in Syria, who comments that the psychological consequences of siege can be just as devastating as the physical dimensions:

‘Children living under siege almost have to re-learn what it’s like to be a human being.’  – UNICEF 2016:7

This report sadly echoes so much of the realities of the human cost of war as captured in the UN High Commissioner for Refugees Report of 2013.

The Oxfam report on the other hand catalogues the role of the superpowers in fuelling and sustaining the conflict in a variety of ways.

In the period 2015-2016 to date, last year UN Security Council Resolutions on the Syrian conflict have been consistently flouted on all sides.  Those engaged in the conflict (along with their international backers, including permanent members of the UN Security Council) are not only failing to implement the resolutions but – ‘through inadequate diplomatic pressure, political and military support to their allies, and direct military action’ – have actively added fuel to the fire of the Syria conflict.

The report is a sickening catalogue of breaches by all sides including Russia and the United States – violations of the rules of war; attacks on civilian infrastructure; arms transfers by Russia to the Syrian army and by the US to ‘approved’ opposition groups; bombing raids by both which have left 200,000+ houses partly or completely destroyed; 1.5 million Syrians in need of humanitarian aid; a massive increase in refugees and 500,000+ living under siege.

At least 250,000 Syrians have been killed since the beginning of the conflict and over 1 million have been injured (‘…notably by the use of explosive weapons in populated areas’ and the use of banned cluster munitions).  The photographs in the report alone tell the tragic story.

The report summarises the conflict and its contours:

‘The Syrian government and its allies, as well as armed opposition and extremist groups, bear the primary and direct responsibility for the horrific reality Syria’s civilians face on this grim anniversary. They have targeted civilians, laid siege to cities and towns and denied access to life-saving assistance. Compounding this catastrophe, several UNSC and International Syria Support Group (ISSG) members — specifically Russia, UK, USA and France, but also Turkey, Saudi Arabia, Iran and others – intensified their military engagement in Syria.  To varying degrees, these states – which should play a key role in ending the suffering in Syria – are actively contributing to that very suffering. The last year was the most desperate since the start of the conflict, with the recently intensified Russian engagement having a particularly negative impact on civilians.’  -Oxfam 2016:7

Oxfam argues that ‘…the cumulative effects of five years of violence have caused enormous harm.  The war has fundamentally damaged the Syrian economy and society.’ As outlined in the following table on page 18 of the report:

‘The parties to the Syria conflict bear direct responsibility for the horrific consequences it has unleashed. The failure to end five years of violence, however, also rests with the governments that sit on the UNSC and the ISSG… The ability to ensure an end to the violence and suffering, and facilitate a sustainable and just peace is now imperative for the protection of civilians in Syria, the region, and beyond.’

Sadly, Oxfam and UNICEF are to be congratulated on issuing these reports (likewise Save the Children for its report Childhood Under Siege: living and dying in besieged areas of Syria (March 2016) which are a reminder to all of us as we argue about migration in the EU what many Syrians are desperately trying to escape.

For more on the situation and our role, see: