5 Lessons learnt from the MASI conference: Towards a more humane asylum system 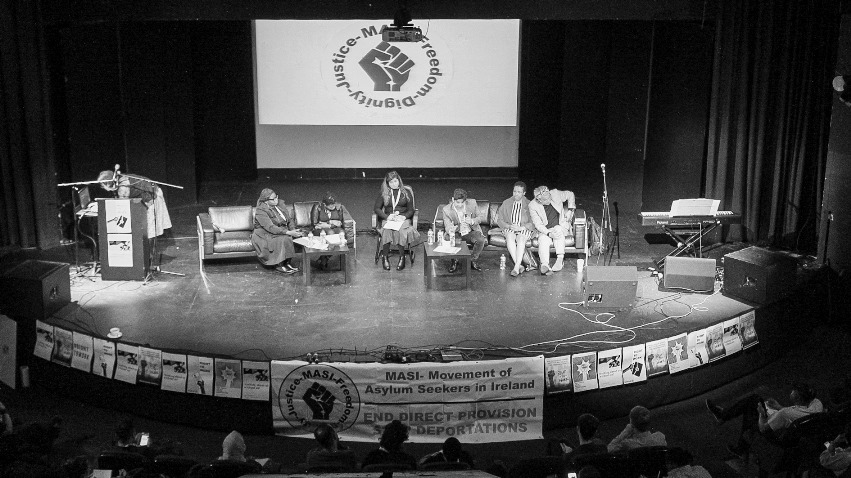 Reporting from the first MASI conference on October 5th 2019 in Liberty Hall, Dublin, Navika Mehta gives us an insight onto the key lessons to be taken from the day-long conference.

The Movement of Asylum Seekers (MASI) founded after a series of protests commenced at direct provision (DP) centres in 2014 in Cork. Their movement’s goal is to reform the current process of attaining a refugee status which currently sees asylum seekers being put in direct provision centres for several years. According to the government’s Reception and Integration Agency ‘Direct provision commenced on 10 April, 2000 from which time asylum seekers have received full board accommodation and currently, personal allowances of €21.60 per adult and €21.60  per child per week.’

In this context as part of MASI’s ongoing advocacy work, “MASI demands an end to direct provision, the right to work and education, residency for all in the system, and an end to the brutal deportation regime”. MASI’s first conference was an opportunity to reflect on these aspects of the international protection system for people seeking asylum in Ireland, five years since it launched.

1. Asylum seekers are also human – “I am a human being”

A key point emphasized throughout the conference is related to legal status: legal status does not make a person any less human. A number of interventions reinforced cold hard realities of the DP system: that it not only strips away basic human rights such as access to work and the ability to simply cook a meal, but has seen incidents covered up and dissenting voices suppressed. An attendee asylum seeker from Trinidad and Tobago said that that she was denied the use of a microwave to heat milk for her son due to her complaint about the dust and dirt in the centre as a result of construction work.

The keynote speaker for the day, Bulelani Mfaco of MASI, highlighted the scrutiny that asylum seekers go through in their interviews that are held in between long intervals of waiting.  Common experiences of this process include where they are accused of “lying” and “making up stories” if the facts don’t match up to their earlier interviews, and where asylum seekers have fled due to suppression and violence due to their sexuality they are asked to “prove” their sexuality or even accused of “not looking gay enough”. Many such incidents reflect a lack of respect and the degrading treatment of asylum seekers by the state.

2. For years, asylum seekers continue to live with the constant threat of deportation

In the first session, the issue of deportations was brought up as a sword constantly hanging over asylum seekers’ necks, deeply affecting their mental health. In August 2018, to date, there have been 17 deportations effected, compared to 15 in July, 20 in June, 13 in May and 19 in April 2018. According to recent report in theJournal.ie, Minister Flanagan told Fine Gael TD Tony McLoughlin, “last year, there was a total of 1,187 deportation orders signed for adults and children and 4,821 signed over the past five years.”

Over the last few months, there have been several protests against deportations of Pakistani and Afghani asylum seekers. One of the speakers described it as a form of death sentence. The threat of deportations is another example of the inhumane system. For years asylum seekers live in the fear that any day they could be sent back. How could anyone lead a ‘normal’ life when they could be displaced any day?

Compounding this experience, as intended originally, people seeking asylum expect to be in DP for 6 months and they believe that their first interview is their only one, only to realise otherwise and potentially remain in DP for an additional 6 years.

3. Children and teenagers in direct provision have as much responsibility as an adult in DP.

A unique section of the conference explored the lives of children and teenagers in direct provision.

The creative potential that teenagers and children in DP have is suppressed as a result of the system. This was exhibited by a dance performance by the talented group “Divas” from the Monaghan DP centre, followed by a panel of three teenage girls where they talked about their experiences.

One of the young speakers explained that having fled Yemen, all her family wanted was to live in safety. She explained the difference between a teenager in DP and a ‘regular’ teenager, highlighting that teenagers in DP have to constantly take the role of adults through filling out forms and living in the stress of working through the legal process.

Another speaker, who was 15, said that she couldn’t take part in any after-school activities as she has to travel back to her centre every evening. She expressed feeling ‘different’ when she got the chance to take part. The final speaker was a student at Trinity College. She travels 4hrs every day from the Monaghan centre to get to college. She kept a positive attitude which motivated the people in the audience, especially the ones in DP. She stressed the importance of not letting DP stop asylum seekers from dreaming and striving.

4. The right to work continues to be a privilege

While we all take for granted the ability to work and earn money to sustain out living, we are blind to the fact that those with pending refugee status’ are not able to work even if they have the necessary qualifications. On the 27th of June 2018, Justice Minister Charlie Flanagan announced that asylum seekers would be allowed to take up any form of employment except positions in An Garda Síochana, the Defence Forces and the civil service. However, in reality, only a few get work permits and the real effect of permits being only valid for 6 months (to be renewed every 6 months until a decision on their asylum status is given) makes it impossible to find a suitable job. There are highly qualified people stuck in the system who are unable to work.

Keynote speaker of the event, Bulelani Mfaco critiqued the 6-month work permit as it makes getting a job more difficult because employers are hesitant of hiring someone who is not guaranteed to remain. He explained that this also poses even more difficulties for parents who are unable to provide for their children as they are unemployed. He suggests that to increase access to the labour market, the IRP card should replace the temporary residency card so asylum seekers can get driving licenses and open bank accounts.

5. After 5 years MASI continues to be a platform for the voices of asylum seekers that are being suppressed by the state

The conference ended with a keynote speech presented by Bulelani Mfaco, a MASI activist, who talked about the 34 emergency accommodation centres opened around Ireland that are overcrowded and present substandard living conditions without day-to-day amenities. He highlighted the lack of practical services provided in the reception centres like processing applications for PPS card, without which asylum seekers cannot get a medical card to access healthcare and get their weekly allowance.

Asylum seekers constantly have to travel long distances to attend interviews in Dublin with no legal assistance or prior knowledge to the requirements when filling out the IPO questionnaire and preparing for their interviews.

Finally, Mfaco talked about the “exhausting” and “mentally torturous” legal process involved in seeking asylum. He stressed that the right to privacy, dignity and integrity of asylum seekers needs to be respected. Currently, many centres are overcrowded, sometimes with over 8 people living in one room. This is also the case in emergency accommodation where asylum seekers could be transferred to a different centre every few weeks, giving them no stability even in their living space.

Not only does the process put asylum seekers in horrible conditions within the DP centres, but it also forces them to re-live their past pain due to the several interviews that ask and re-ask the same questions. Regarding that, Mfaco shares a case that he encountered.

“I read a case where a woman spent 8 years in Direct Provision. She was raped repeatedly by multiple men in her country, effectively used as a sex slave for the military.  The Department of Justice and Equality said she was lying about everything that happened to her and rejected her asylum claim in the first instance. She was granted refugee status in the appeal tribunal, after 8 long years in the system. She is not the only asylum seeker to spend years in the system because the Department of Justice and Equality said they are lying.”

Overall, the MASI conference presented a clear demand – Direct Provision must go. It gave a platform to asylum seekers to voice their issues and concerns. Several times during the conference, asylum seekers from the audience would take the opportunity to question and express their grievances with the system that further solidified MASI’s message and gave a raw and real insight into their lives. MASI conference ended with a collective feeling of hope and a sense of determination for change. The message was clear, quoting Mfaco, “The simple and easy way to end Direct Provision is to stop treating us differently. We are human beings just like you.”

Navika is a recent graduate of philosophy, political science, economics and sociology (PPES) from Trinity College Dublin and campaigns to end racism and end Direct Provision.