This research explored the knowledge of and views on the global dimension in education amongst student teachers – both before and after they completed DICE modules in their respective initial teacher education colleges during the 2005-2006 academic year for primary education. 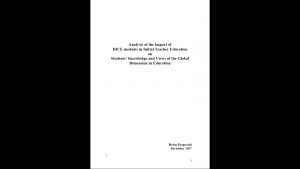 The specific objectives of the research were to examine:

This small scale research examines the impact of course A and course B DICE primary school modules on student teachers.

Download: Analysis of the Impact of DICE modules in Initial Teacher Education on Students’ Knowledge and Views of the Global Dimension in Education PDF (277.8KB)