The UNDP’s HDR is an annual report that measures human development across the world.

The 2014 HDR focuses on vulnerability and its impact on human development. It argues that unless the issues affecting the most vulnerable throughout the world are ‘systematically’ addressed, through changing policies and social norms, development will be continue to be inequitable and unsustainable. 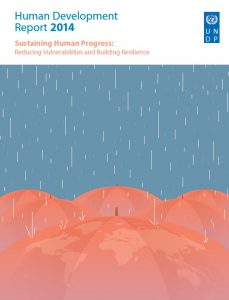 The 2014 report focuses on ‘human vulnerability’ and ‘human resilience’ as it relates to the erosion of individual choice and capabilities and ensuring that individual choice is ‘robust,’ highlighting the need to support coping mechanisms to adjust to adverse events in the lives of the most vulnerable.

Packed with graphs, fact boxes, case studies and comments from a range of experts across many dimensions of ‘development’ the report is designed to used widely by educators, researchers and policy makers.

The report outlines that there are:

The key messages of the 2014 report include:

“It is possible and cost-effective to push for universal access to basic social services in most developing countries.” (Khalid Malik, report lead author)

Report also available to order for $45 from UN publications.