Now in its 4th edition, the Global Hunger Index has become the standard for tracking trends in the comparative levels of hunger in different parts of the world and across individual nations.

Organised annually by a leading theme, the report is designed for policymakers, antipoverty workers and advocates and is driven by two factors: the need for information (on how and why hunger is occurring) and the need for action (addressing the short, medium and long term causes of hunger).

Because developing countries are more integrated within world markets through trade, investment flows, and remittances than in the past, the latest food and financial crises have stronger effects on those countries than during previous crises. The impact is also stronger on the poor and hungry, many of whom are now more closely linked to the wider economy, which this report explore.

An important part of the solution to global hunger is reducing gender inequality. This report compares the 2009 GHI with the 2008 Global Gender Gap Index, which is made up of four subindices: economic participation, educational attainment, political empowerment, and health and survival. The evidence shows that higher levels of hunger are associated with lower literacy rates and access to education for women. High rates of hunger are also linked to health and survival inequalities between men and women. Reducing gender disparities in key areas, particularly in education and health, is thus essential to reduce levels of hunger. 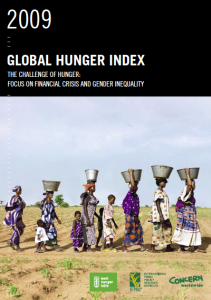 The indicators are then combined into one score. The higher the score, the more desperate the predicament of those affected. The Index is calculated for 122 developing and transition countries for which data on the three components of hunger are available.

As the world approaches the 2015 deadline for achieving the Millennium Development Goals (MDGs) – which include a goal of reducing the proportion of hungry people by half – the 2010 Global Hunger Index (GHI) offers a useful and multidimensional overview of global hunger. The 2010 GHI shows some improvement over the 1990 GHI, falling by almost one-quarter. Nonetheless, the index for hunger in the world remains at a level characterized as “serious.” The result is unsurprising given that the overall number of hungry people surpassed 1 billion in 2009, even though it decreased to 925 million in 2010.

A range of factors contribute to the crisis of early childhood undernutrition. Policy and program solutions, therefore, have to address the range of causes – both immediate and underlying. The report, therefore, makes several policy recommendations focussed on 5 levels of action: