“What is being done about the impact of animal agriculture on our environment?”

Cowspiracy is a documentary made in the USA that seeks to uncover the ‘truth’ behind the “most destructive industry facing the planet today,” and the reasons “why the world’s leading environmental organizations are too afraid to talk about it.” 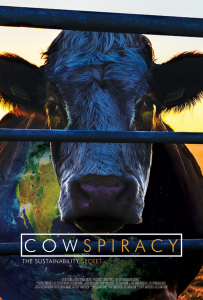 It is widely acknowledged that animal agriculture is responsible for more greenhouse gases than the transportation industry. This documentary reveals that it is also the leading cause of “deforestation, water consumption, pollution, species extinction, habitat loss, topsoil erosion, ocean “dead zones,” and virtually every other environmental ill…Yet it goes on, almost entirely unchallenged.”

Cowspiracy interviews ‘experts’ in the environmental movement, including Dr. Richard Oppenlander, Michael Pollan, Dr. Will, Tuttle, Will Potter, Howard Lyman, Will Anderson (see bios https://cowspiracy.com/featuring-the-expertise-of/). The documentary uncovers the “devastating environmental impact large-scale factory farming has on our planet, and offers a path to global sustainability for a growing population.”

This is not without its risks as the filmakers uncover “an intentional refusal to discuss the issue of animal agriculture, while industry whistleblowers and watchdogs warn him [Andersen] of the risks to his freedom and even his life if he dares to persist.”

Big Ideas in this Resource

“This film has a simple thesis:…What is being done about the impact of animal agriculture on our environment? The answers, or lack thereof, will astonish and bewilder you. If that isn’t enough, the information presented about consequences of agribusiness and its direct relationship to the degradation of the environment on a global scale will make you think twice before reaching for that pork chop.

Looking past the Michael Moore-isms, sometimes-hyperbolic interviewees and the familiar outline of other progressive documentaries with an axe to grind, the facts are laid bare. The bottom line is that the ramifications of animal agriculture, as presented in this film, are not being adequately addressed by major environmental groups, the media, or the government, and finally someone has put together a cohesive collection of information for public viewing and opinion.”

“This documentary isn’t about discounting the efficacy of environmental groups, government-funded environmental initiatives, nor is it vegan propaganda; it’s about bringing further awareness to how our everyday choices impact the environment….Even being a vegan doesn’t exempt you from contributing to meat consumption.”

Available from Nov 6 2014 at https://cowspiracy.com

Ships internationally. Requests for screenings accepted by the production team.