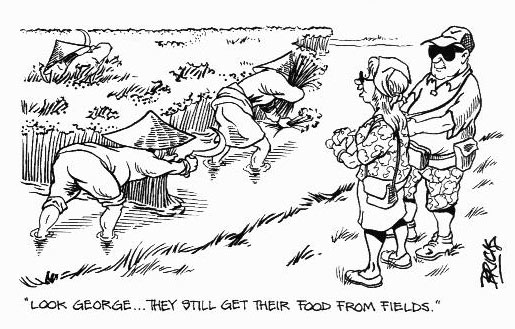 Cartoons express their creator’s experience of the world around them, to entertain, persuade or express outrage. A cartoon can be controversial, provoking strong emotional and political responses; some cartoons have been banned or have led to violence. Many are hugely popular, for example the animated films that young people might watch over and over again tell stories about social justice, conflict resolution and sustainability.

With this activity kit, teachers can:

Working in pairs, choose a couple of cartoons from our cartoon section and discuss:

What is each cartoon about?

What is the key message?

Do you think it is effective in conveying this message?

Why do we use cartoons?

We use cartoons in order to focus on communication, techniques and meaning, involving a range of global learning topics from climate change to development, government to trade.

Start by showing learners a cartoon that is chosen because it makes everyone laugh, its your favourite cartoon, or if you are trying to convey a particular message. Gary Larson’s Far Side series, Jeff Kinney’s Diary of a Wimpy Kid or something from the Beano perhaps are a good place to start.

You could ask learners:

Explain how some cartoons have a ‘bigger picture’ – the one you see immediately and then the message it tells you. Show the group a satirical cartoon chosen from a newspaper on a current topic – such as Martyn Turner’s cartoons from the Irish Times (visit Martyn’s profile on Cagle or the Irish Times).

Ask leaners again what do they see in the cartoon and what do they think its trying to tell them. Show the group an article about the same topic and ask them which they would be more likely to engage with and why. What are the main differences between the first cartoon (the Gary Larson/Beano/Diary of a Wimpy Kid) and the Turner cartoon? What do they have in common?

Political cartoons can be a particularly valuable resource for development and human rights education. They, at their best, encapsulate some very complex issues, different viewpoints and some of the contradictions which are a real part of many situations. They can make links between issues which can turn them inside out – this is one of the key strengths.

Political cartoons will often provide the stimulus to stop and think, to look sideways or look afresh at a particular issue. We hope that users of this section will find much to provide a focus for personal reflection. However, the main purpose of this introduction is to provide a few basic activities for the use of cartoons in discussion of human rights and development issues.

Cartoons have a number of distinct advantages as a stimulus to group discussion about issues:

The activities below and in each of the following sections can be adapted to a wide range of learning situations. It is however important to note that we need to build up our skills in group discussion and debate and in using stimulus materials such as cartoons.

The learning skills that can be developed by using materials such as cartoons include:

There is also a sense in which cartoons help us to laugh at ourselves, and our involvement, individually and as a society, in often, desperate situations. Perhaps this should also be identified as a skill.

You could ask this question of any cartoon but there is a special value in asking it about one that is open to very wide interpretation such as those that follow immediately below.

The discussion moves rapidly away from from the cartoon to the interests and concerns of members of the group. This kind of activity is particularly valuable when trying to work with a new group or when members don’t know each other. A reasonable amount of time should be allowed for people to work on their initial thoughts and to share ideas etc.

There are a number of simple activities which encourage people to take a closer look at a cartoon and to say how they see it and the issues it raises.

At an early stage it may be useful to take time out to discuss one or two cartoons and work on ‘reading’ them.

Ask small groups to look closely at the detail:

Bring the groups together to share their discussions but try to steer the discussion away from the issues that arise and, instead, try to concentrate on how individuals ‘read’ the cartoon.

When you introduce a theme to a group it is useful to find ways to explore what the group already knows about it and how best to build on this as a prelude to working more in depth on the issue.

Display a selection of, say, 15 cartoons and ask the group to look at them. Working in pairs or three’s, decide what main themes link them together. They could then group the cartoons together that highlight the issues best and arrange them in a poster for sharing with others.

Another useful way to introduce a collection of cartoons is to ask people to choose three cartoons from those on display which they liked most… or which say most to them about the issues being discussed. They could mark these with a sticker with their name on it. They could then pair up with someone who has chosen the same cartoon(s) and discuss their choice. Did they see similar or different things in the same cartoons?

This activity also has the advantage of mixing the group, reviewing the whole collection and working with some cartoons more closely. The pairs can then share some of their discussions with others and introduce one of the cartoons they chose.

Ask pairs to choose a cartoon around which they develop a headline or short article. If they use different headlines, does it influence how the cartoon comes across?

The pairs could then share their articles with the rest of the group. It may be useful to choose different cartoons and in this way raise a wide range of issues or choose the same one and explore the different ways it is worked into the article.

You could use a cartoon such as that below. The original cartoon said Luxembourg, Bruxelles and Strasbourg on the signposts… what would your group wish to put on the signs and why? What would the message(s) be?

It is valuable both as an introductory activity or when you are wanting to discuss more detailed issues to focus on one or two cartoons and make a more detailed study of them.

Give each pair a copy of a cartoon mounted on a large sheet of paper and ask them to write as many questions as they can relating to the cartoon. This encourages a closer look at detail as well as the cartoon as a whole. It is not necessary to be able to answer the questions, the process of asking them will provide a good stimulus to the discussion when they share their work with other groups.

Another approach which would help more detailed study of one cartoon is for you to pose the questions for the group to consider. In order to encourage a group to discuss the cartoon below, for example, you could ask questions such as the following: 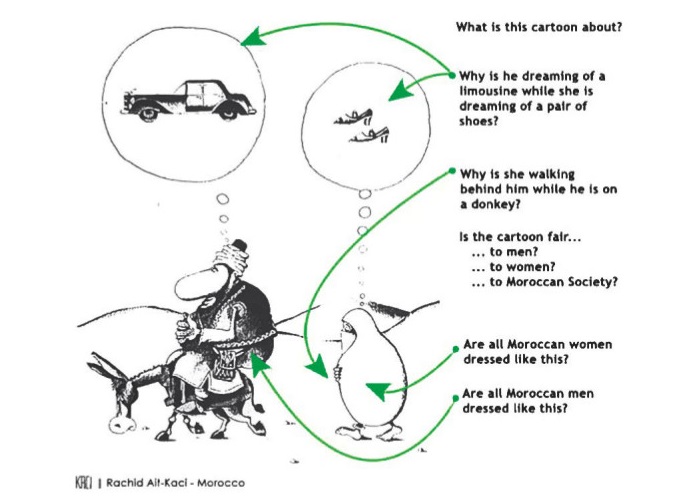 Suggest that they rank them in a diamond pattern such as the one here. When they have done this they can compare their ranking with those of other groups. This can lead to a full discussion because the task makes sure everyone has been involved in thinking about the issues.