Chevron claims that they achieved their target of lowering carbon intensity between 2016 and 2020, but is this really helping to lower emissions? Kai Evans reviews the evidence.

In July 2022, the Irish Museum of Modern Art (IMMA) ended their involvement with the Texaco Children’s Art Competition, which has been a hugely popular competition in Ireland for over 60 years. This is as a result of campaigners such as Tom Roche and environmental writer John Gibbons (since 2017) highlighting issues surrounding Texaco’s fossil fuel usage, catastrophic environmental damage (such as in Ecuador) and using the competition as ‘artwashing’, or attempting to improve the company’s reputation in Ireland through supporting the arts.

Chevron (who bought Texaco in 2000 and Valero Energy in 2011) claim that they achieved their target of lowering carbon intensity between 2016 and 2020 (i.e. they reduced their level of carbon intensity by a little over 10 kilograms CO2e/boe for Scope 1 and Scope 2 emissions) in their 2021 corporate sustainability report.

And yet, on 13th June this year, Chevron claim:

“As part of a larger effort to help meet rising energy demand and lower carbon emissions, we are increasing production in the Permian Basin by over 15%”

Are activities such as this just a form of greenwashing, where large corporations or governments make pledges with regards to the climate, but rarely back these up with meaningful action?

The claim is rated misleading (elements of the claim are accurate, but presented in a way that is misleading) based on the best evidence publicly available at this time.

Chevron did seemingly meet their lower carbon intensity targets for 2016-2020 for Scope 1 and Scope 2 emissions, but it is presented in such a way that their actions are having a positive impact on global emissions, which is not entirely accurate.

In reality, this means little, as Chevron have actually increased their hydrocarbon production and total emissions over the same period.

To look under the hood of pledges, actions and evidence, it’s important we understand the language and ideas used by companies when they publish reports and make public ‘sustainability’ declarations.

To this end, we need to look at three key ideas: ‘carbon intensity’, ‘scope emissions’ and ‘greenwashing’.

While Chevron reduced their carbon intensity levels in the period 2016-2020, they have also been increasing hydrocarbon (oil and gas) production since 2009, and indeed since 2016, as shown in a recent a study in February by researchers Jusen Asuka, Mei Li and Gregory Trencher from Tohoku University and Kyoto University.

Hydrocarbon production is often considered a reliable indicator of overall greenhouse gas emissions, as hydrocarbons are the principal components of petroleum and natural gas.

Greenwashing, or greenwash, as the Oxford Dictionary states, is

‘disinformation disseminated by an organization so as to present an environmentally responsible public image’.

There are countless examples of this practice, but here’s a brief selection:

We need to talk about 'Scope emissions'

The Greenhouse Gas Protocol (GHGP) is a global, standardized framework for measuring and managing emissions from private and public sector operations, value chains, products, cities and policies to enable greenhouse gas reductions and mitigation actions. The initiative was established and led by the World Resources Institute (WRI) and the World Business Council for Sustainable Development (WBCSD).

The Protocol makes reporting Scope 1 and 2 emissions mandatory, but Scope 3 emissions are voluntarily reported. As a result, many companies exclude these from their targets and data. But what are Scope 1, 2 and 3 emissions?

Only reporting Scope 1 and 2 emissions, as Chevron has up until 2018, is therefore really relatively meaningless in the broader context of the climate crisis. The addition of Scope 3 reports in the last 2 years and the subsequent push by shareholders at the AGM in May 2021 in for a proposal to reduce Scope 3 emissions has placed management in a tricky position, who opposed the proposal.

As a follow on, Chevron set a target in October 2021 to reduce the carbon intensity of its products (Scope 3) by 5% by 2028. To place this in context, here is the response from the green shareholder group Follow This that led the resolution at the AGM:

“Chevron is merely interested in appeasing shareholders, a 5% intensity target is a snub to investors who are truly committed to reaching the Paris agreement,” said Mark van Baal, founder of shareholder group Follow This that filed the climate resolution at Chevron.

The scientific consensus is clear: the world needs to reduce absolute emission by around 40% by 2030 to have any chance to achieve the Paris Accord. Until Chevron’s targets reflect this fact, their strategy falls short of Paris-alignment. 5% is disappointing tokenism, not a serious attempt to confront the climate crisis.”

More detailed info on the different scopes, categories and their importance can be found from the Plan A Academy.

A note on the problem with 'lower carbon intensity'

Chevron’s (and most other companies) carbon intensity has fallen due to becoming more efficient extracting fossil fuels. For example, they may use electric vehicles to transport people and equipment, or perhaps solar powered pumps, or they might use energy efficient lightbulbs, or some of their electricity is sourced renewably (via wind or solar energy) by their utility provider. These are just basic examples, but it is easy to see how this would lower what’s known as ‘Scope 1’ and ‘Scope 2’ emissions, and the carbon intensity per barrel of oil.

However, this does not take into account ‘Scope 3’ emissions, continued production and exploration of oil and gas, or the actual use of the fossil fuels which they extract and sell to the world. So while they may be more efficient per unit of fossil fuel they produce, it’s not actually reducing global emissions – it’s actually increasing them!

More on CO2e can be found here, BOE here and carbon intensity here.

The Climate Accountability Institute have also calculated Chevron’s total greenhouse gas emissions. Their most recently available report from 2020 has data up until 2018.

On this basis, between 2016 and 2018, Chevron clearly increased CO2 emissions, methane emissions, and total emissions, as shown below.

Pledges and actions under the microscope

While Chevron’s carbon intensity levels have fallen, their total emissions and hydrocarbon production have increased in the last 10 years.

As we can see, while Chevron have improved in areas around disclosing climate risk, climate change awareness and more recently, carbon pricing and emissions disclosure, Chevron have said or done little else positive, yet have continued to substantially increase fossil fuel production and exploration.

The focus of the ‘clean energy claims’ study on Chevron, ExxonMobil, BP and Shell is conclusive:

The financial analysis reveals a continuing business model dependence on fossil fuels along with insignificant and opaque spending on clean energy. We thus conclude that the transition to clean energy business models is not occurring, since the magnitude of investments and actions does not match discourse. Until actions and investment behavior are brought into alignment with discourse, accusations of greenwashing appear well-founded.

As explained in a Guardian report, this further confirms what many have said for years: ‘oil companies are largely all talk and no action.’

Video: Chevron ad from 2021 explaining “We’re lowering the carbon emissions intensity of our operations, investing in lower carbon technologies, and exploring renewable fuels of the future.”

Chevron’s typical response to ‘greenwashing’ claims generally follows a standard company line. In March 2021, Greenpeace, Global Witness and Earthworks filed a complaint with the Federal Trade Commission in the USA on Chevron’s greenwashing tactics and misrepresentation of the public.

This complaint focused on ad campaigns and Chevron’s claims of ‘ever-cleaner energy’ despite increasing emissions, implying that their work is not harmful to the environment and for using jargon such as ’emissions intensity’.

‘We are taking action to reduce the carbon intensity of our operations and assets, increase the use of renewables and offsets in support of our business and invest in low-carbon technologies to enable commercial solutions.’

Chevron/Texaco’s responses to well-documented challenges over many years has led to them being accused of legal intimidation and an aggressive defensive style, such as in the Ecuadorian “Amazon Chernobyl” case. Deep in the Amazon rainforest of Ecuador, Texaco (later owned by Chevron) reportedly dumped 72bn litres of toxic oil waste,  allegedly causing high levels of cancer and other illnesses for the indigenous people. This is a serious cause for concern and should be widely known.

Questions about access to justice and access to remedy are important. Corporations can counter-sue their accusers, crushing any opposition under, to use Chevron’s words, “an avalanche of paper”. Environmental advocate Erin Brockovich noted in The Guardian in February 2022:

“This is part of a disturbing legal playbook sometimes known as Slapp – strategic lawsuit against public participation. Massive corporations can fund endless litigation against activists or critics. They don’t even need to win in court, because they can intimidate or bankrupt their opponents in legal fees.”

In 1998, Chevron, ExxonMobil, utility companies and the American Petroleum Institute signed up to the Action Plan, which stated that ‘victory will be achieved when average citizens’ and the ‘media ‘understands’ (recognizes) uncertainties in climate science’.

Chevron (and many other energy companies) attempting to mislead the public is not a new phenomenon.

Based on the What The Fact? scales guide, the claim is rated as Misleading – elements of the claim are accurate, but presented in a way that is misleading – based on the best evidence publicly available at this time.

Transparent fact checking is a powerful instrument of accountability, and we need your help. Send tips and ideas to facts@developmenteducation.ie 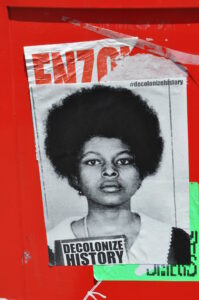 How might education practitioners begin the a journey to decolonise how they teach and explore global issues? Niffy Olamiju reports on a workshop organised by the Irish Development Education Association in May 2022.

2 actors, one trial and a Billion hashtags. What happens when the media gets a hold of a woman on trial? This blog takes a look at the reaction to the Heard v Depp trial and what it reveals about women’s representation.